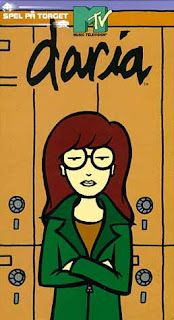 "You're too cynical." - "Really?" - "I meant that sarcastically." Lawndale. She is intelligent, sharp-witted, secluded, honest, non-conforming, stiff, grotesque and devastating: Daria (16) is an "anti-teenager", how Val, a materialistically oriented editor of a magazine, would call her, because everything she says and does is deprived of the influence of the perception of youth. Daria lives in a normal family - her mom Helen is an ambitious lawyer, her dad Jake is employed in a consulting business while her sister Quinn is the most popular girl in school. Daria on the other hand isn't popular at all, the kids barely speak with her while she is on "war conditions" with her teachers. Still, she found one friend, Jane. With time she even gets a boyfriend, Tom.

Too good to be true? There's in the first 5 minutes of acquaintance with the title heroine some kind of a special feeling that wakes up all by itself and gives the will to watch further episodes of this show even when one gets use to it. Daria, an unpopular teenage girl with glasses who hates her teenagehood, is one of the best female characters that ever graced the screen, full of extraordinary personality quirks and spirit: she is intelligent and funny, but a complete outsider since she does not really like any of the company that surrounds her, in probably one of the most unusual shows, a one that breaks the cliche that being a teenager is "the best time of your life". It perfectly identified the archetypes of high school "hierarchy". "Daria" is one of those 1 % of shining achievements that reach the highest frequency and level of sophistication through the most casual, relaxed way, the simple 'slice-of-life' manner. Excellent are all the layers of the individual heroine who tries to live in the world she criticizes, while except for complicated protagonists, the subversive screenplay by Glenn Eichler also stands out and even gives the story a melancholic touch. In any case, an unusually anti-populist product for MTV program: Daria is, despite her cynicism, always serious, but when she smiles like Mona Lisa, it's like a miracle.

The story is full of social satire and mockery of the superficial side of the world: in episode "Marts of darkness" a "Sick Sad World" commentator announces the next theme: "Jesus Christ appearing in a candy bar". In "This years model" Jane makes a caricature of the two model "hunters" by portraying them as vultures. "The Road Worrior" is an amazing display of road movie and nostalgia - in it, Daria decides to go along with the "adventure" and go with Jesse, Jane and her brother Trent in a van to drive to a concert in some province. That episode brought all the potentials to the maximum: for the first time, the cold and rational Daria "softened" up in a 'romantic' interaction with the "rebellious" Trent, sealed away in a van. She even put make up for the trip, but no use: she gets stung by a bee, breaks her glasses, gets a stain from a sandwich on her pants and - worse of all - has to urinate in the bushes near the road! The inspired script by Anne D. Bernstein created a melancholic feeling that gave the experience of youth to those who missed it. That is because when a story has inspiration, even its "lesser" scenes are superior.

In "Too Cute" there's a brilliant scene where the computer of Dr. Shar, a beauty surgeon, simulates various versions of Quinn's and Daria's faces, in which Quinn ends up as Dr. Shar and Daria as Quinn! Surprisingly cute "Ill" has one of the greatest melancholic endings of all times; "Speedtrapped" is overrated but contains a fantastic fake "commercial bumper" in the scene where Daria and Quinn are in the car; whereas it is cool to point out how "guest writer" Dan Webber came, wrote the best "Daria" episode, "I Loathe a Parade", and then just simply disappeared. "Parade" offers flawless writing: numerous cameo appearances of old characters from previous episodes, among them even Ted who takes a photo of Daria and Tom for his love article; the scene of the sad heroine staying all alone on the street covered with paint. Also, the series features some of the best soundtrack collections of all time (Juliana Hatfield's "Live on Tomorrow"; Letters to Cleo's "I See"; The Posies "Will You Ever Ease Your Mind"; Pet Shop Boys' "Too Many People"...) and a special bonus are the closing credits with a split screen showing "alter egos" of the characters on the left side of the screen that settle the score straight, featuring a staggering level of outburst of creativity rarely seen anywhere (Brittany as Kevin's executioner, Sandi as a falling skydiver without a parachute, Mrs. Li as a prostitute, the three J's as three monkey fools, Jane as Emma Peel or Vishnu...) whereas even Daria's shaky romance with Tom in the final two seasons has a point, which is why this small masterpiece of animated shows can be shown and analysed from any perspective.

Now, this is my most favourite cartoon ever. I was so in love with Jane when I was a teenager.

Ohhhh Myyyy....I used to love this show in high school. Thanks for dusting up the old memories, pal!!

Oh, absolutely. I adore it.

I'm glad you two like it too. It's an understated, straight-forward, simple, but great show with great two heroines. Some of the alter egos in there, like Jane as Emma Peel or Daria as Barbarella, are simply smashing in my mind.

Ever since I first heard about the concept for this show and knew it was going to air, I wanted to see it. Out of all forgotten TV shows, I think this one is one of most unjustifiably ignored ones.