What Ever Happened to Baby Jane? 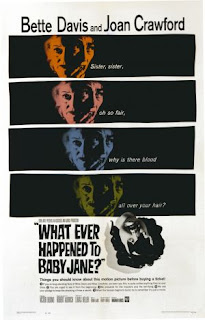 When she was a little girl, Jane Hudson was known as Baby Jane and was a famous child star, while her sister Blanche was unknown. Some 20 years later, the tables have turned and Blanche is a famous movie star, while Jane is despised by movie producers for her ugly look. In an accident, Blanche was left crippled from the waste down, and the official version was that Jane tried to kill her with her car. In the present, Blanche is in a wheelchair while Jane takes care for her in a giant mansion. But Jane is becoming increasingly aggressive towards her, locking her up, torturing and isolating her. She even kills their maid. When Edwin, a music composer hired by Jane, discovers Blanche tied up in bed, he contacts the police. Jane runs away with Blanche to a beach. There Blanche tells her the secret: she was the one who tried to kill her with a car, but missed and injured her back from a crash with the fence, while Jane was too drunk to remember anything.

Excellent psychological horror drama is an extremely intense experience since it reaches almost Hitchcock's caliber by leaving the viewers with a feeling as if they are walking on needles, and it doesn't come as a surprise for a film directed by Robert Aldrich, a cynical and deeply pessimistic author who always shows the dark side of human nature, a one that wasn't explored back in those days. Back in 1962 a large part of the audience felt the story is simply too much for them to handle, but even today "Baby Jane" seems like one of the most shocking films of all time because it shows that some of the most horrifying evils can be hidden behind an innocent looking person who acts all nice on the outside, while committing evil on the inside. Bette Davis is cast perfectly as the disgusting, monstrous Baby Jane, mirroring the cynical take on the consequence of many child celebrities, while Joan Crawford is also fantastic as the victim, her sister Blanche bound to a wheelchair. Many of the aggressions done towards Blanche from Jane are very subtle, like when she locks her in her room or fries her pet bird to serve it for lunch, and the maniacal feeling of helplessness is, despite some campy elements and overstretched running time, virtually impeccable. To make things even more multi layered, the plot twist at the end gives the story a whole new perspective and asks just who is the victim, and who the aggressor.