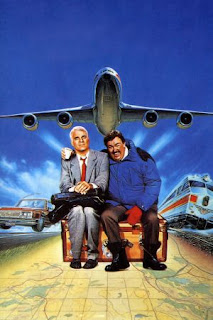 Happily married family man Neal Page is looking forward seeing his family in Chicago for Thanksgiving. He boards a plane in New York where he meets the overweight Del, but due to a blizzard their flight is diverted to Kansas. Since they are going into the same direction, they team up: they travel in a bus, then a train, in the end hiring a car to continue their journey, but are constantly followed by bad luck. Even though Neal blames Del for a lot of troubles they get into, they eventually become friends. When they finally arrive in Chicago, Neal finally figures Del doesn't have a family since Del's wife passed away some time ago. Thus, Neil invites him to his home for the holidays.

"Planes, Trains and Automobiles" is a simple mainstream road movie, but a one that easily surpasses a whole mass of overhyped comedies made today both with its humor and charm, that leans heavily on the chemistry between the brilliant comedian John Candy and Steve Martin. Even though it is a one-note story that seems to be inspired by the old slapstick Laurel & Hardy buddy comedies about misadventures, director John Hughes crafts a neat achievement out of it and must be congratulated for making a super amusing, fun and vibrant picture book, even adding a little unintentional nostalgic 80s flair. Disregarding a couple of crude or cheap atempts at humor, this is a gentle, pleasant and sweet family film, that compensates the 'thinness' of virtuosity through an array of great gags, and, at the end, even some wise messages about friendship without turning preachy. It is definitely a holiday film with at least one joke that is spectacularly hilarious: the throrough sequence where Del is driving the car at night on the wrong side of the highway, while Neal is asleep, and which culminates with a grand encounter with two trucks coming directly at him and a quick insert of a hallucination of a skeleton.