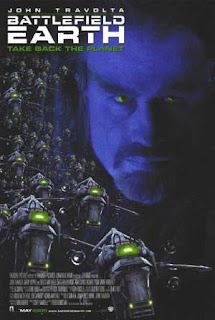 In the year 3000, Jonnie Goodboy Tyler lives in a cave with surviving people without technology. They are convinced that they were abandoned by gods because they became selfish and thus demons appeared and destroyed Earth's civilisation. Tyler runs away on a horse in order to see what happened but gets arrested in a spaceship and brought to prison. There he figures aliens from planet Psychlo captured the human species in order to exploit gold from Earth. Alien Terl educates Jonnie and his people with a special machine in order to send them to mountains to get gold which he would then take for himself. But Jonnie destroys planet Psychlo with an atomic bomb and in an uprising captures Terl in a prison.

73 million $ was the cost of this fiasco "Battlefield Earth", a movie adaptation of L. Ron Hubbard's novel with the same title, after which one has to pose the question: how can Scientology be the right religion if it's making such bad films? Without magic or mystic, the authors profanely display the trashy Sci-Fi story about 9 foot tall aliens, one of which is named Terl and played by John Travolta with silly dreadlocks, who enslaved the humans who sometimes even eat living rats. There are occasionally a few good scenes, many of which are unintentionally funny, like a laser that hits a running man in slow motion or when Terl hates that he has to stay on Earth upon which one of his colleagues adds to him: "Don't worry, one day you'll die and land in hell and then that will be an improvement!" But as a whole the film is a strange kind of nonsense with illogical plot (why wouldn't Terl leave humans alone with an educating machine that can give them vital informations?), pointless situations and weak execution.