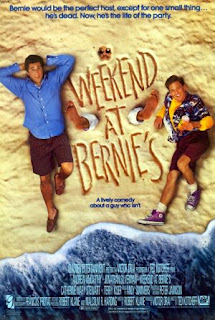 New York. Insurance employees Richard and Larry discover a 2 million $ heavy mistake in one insurance policy and proudly go to report it to their boss Bernie, who seems all pleased and invites them to spend the weekend at his house at Hampton Island. Yet, he is the one who arranged the fraud and asks his mafia friends to eliminate them. Yet the mafia boss instead decides to eliminate him. When Richard and Larry arrive at Bernie's house, they find him dead, yet all other people "talk" to the corpse and don't realize it. Since they are afraid the police might suspect them and in order for Richard to spend some time with Gwen, they go along with the game. In the end, the police gets the real assassin.

"Weekend at Bernie's", obviously inspired by "Jo" and Hitchcock's "Trouble with Harry", is a surprisingly solid and fluid comedy that refused to go deeper into the the territory of black humor, even though some situations were really close, turning into a cheerful grotesque we haven't seen in a long time. The direction is solid and so sustained that we would almost forgive the charming McCarthy and Silverman for all the whining of their characters, while the story is full of life that compensates for it's silly, corny, sometimes rough approach. Indeed, out of all the gags revolving around the concept where everyone thinks the dead Bernie is still alive, the only truly laugh out loud scene is the one where Larry and Richard are driving a powerboat while the people are thinking that Bernie is water skiing behind them, even though it's obvious his body is just getting dragged through the sea like a mob attached to a rope. The only other gag that comes close to that intensity is the one where the killer who murdered Bernie is petrified to see him "alive" again and again, while all others are neat, but don't manage to exploit the idea to the fullest, maybe because the macabre contrast of the dead body acting to be alive has some exaggerating charm and humor, but it's hard to capture it.