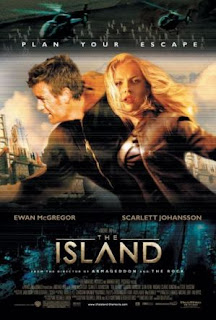 In 2019 Lincoln 6-Echo lives inside a small colony of people who are told that the Earth was destroyed by a toxic catastrophe and that participating at the lottery they can move one by one to the perfect tropical "island". Yet he soon discovers that there is no island and they are all clones from real people who are sick and who just kill the clones and take their organs when they need them. He persuades the blond Jordan 2-Delta to escape the community and land on the surface of the Earth somewhere in the desert in Arizona. The colony's chief, Dr. Merrick, orders his crew to catch them because he lied to the sponsors he is only harvesting organs, not real people. Lincoln finds his original, Tom Lincoln, who tries to betray him, but dies. Lincoln goes to the community and frees everyone.

Director Michael Bay never seizes to amaze us - in a negative way. Just when the first few images of "The Island" - the sea, a boat, the sky - make you think you're watching a shampoo commercial, the movie starts and the images turn out to be a dream. The movie then goes on to describe us it's hermetic world: the main protagonist, Lincoln, wakes up and urinates, which automatically causes the computer to analyze his urine and determine what he lacks. There are neat ideas all around the story, which seems to be copying "Parts: The Clonus Horror" and include variations of Huxley's novel "A Brave New World" and Orwell's "1984", yet all those things were already seen and the same formula repeated again here seems lifeless, listless and anemic. When in the second third, revolving around the two protagonists Lincoln and Detla (Scarlett Johansson, who seems eerie like a Barbie doll) running away from the colony hunting them down, the movie turns into an action spectacle, it's not hard to conclude the main problem of "The Island" is that it had too much action and too little philosophical pondering. One of the rare examples of isnpiration is the scene where the engineer James McCord (Steve Buscemi) goes on to explain Lincoln and Jordan they are just clones, adding sarcastically: "Why do I have to be the one to tell you there is no Santa Claus?" It's also not quite clear why Lincoln gets to persuade Jordan so easily to escape from the colony, or why only he gets to meet his 'original', and she doesn't, nor why the drama was so trivialized. It's interesting to note that the movie is at the same time conservative (human life, no matter in what form, demands for dignity) and reactionary (question the authority and strange traditions), while the technical aspect is top notch and the finale is surprisingly touching. Still, it's nothing more than a solid film: it didn't make anything extraordinary wrong, but neither extraordinary right or poignant.