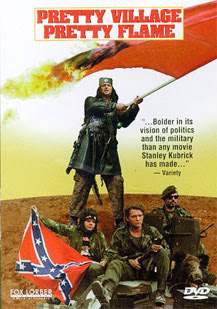 Bosnia, 1 9 5 0s: a new tunnel of brotherhood and unity is about to get introduced, but one man cuts his thumb when he tries to cut the ribbon. 1 9 8 0s: Tito died while two boys, Serb Milan and Muslim Halil, are afraid to go into the tunnel. 1 9 9 0s: Halil and Milan are still good friends, but when the war between Serbs and Muslims breaks out, their relationship gets shaken. Milan is drafted into the Serbian army that robs and kills, but when he spots three Serbs putting a cafe bar on fire, he shoots them. Together with 7 soldiers he hides in the infamous tunnel and meets the American journalist Liza. The Muslim army starts a siege of the tunnel so they have to drink urine to not die from thirst. During an explosion many die while Milan lands in a hospital, dragging himself to kill his friend with a fork, but dies from exhaustion.

Originally directed, fresh, but controversial black humored war drama "Pretty Village, Pretty Flame" gets numerous compliments for bravely showing the theme of the war in Bosnia and Herzegovina in a nihilistic and quizzical way, even going so far to bravely imply that the Serbs had a big involvement in starting the whole thing, while the skillful editing gives it a neat touch. The whole movie is rich with darkly hilarious scenes, like the Christmas tree with a Serbian five-star instead of a real star on top; a patient in the hospital who shouts: "Recover! Recover!"; the hero who trips on a pig; a student who hits himself with a fist... Yet in the end, the strong and depressive atmosphere of war prevails, especially since it cynically plays with the "tunnel of brotherhood" and the notion that every Serb character in the story actually had a nice life in Bosnia before the war started, some of which even had best friends in the Bosniak Muslim population. Excellently intervened, undoubtedly quality made film, but with a running time of 130 minutes, it is overlong considering a majority of the story plays out in the tunnel, while its tendentiousness and "rough" style bother occasionally.