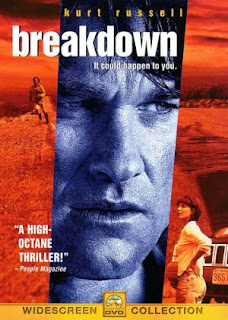 Jeff and his wife Amy are driving in a car from Massachusetts to San Diego for a new job, but then their engine overheats and they have to stop. A truck driver, Red, stops by and is polite enough to offer to take Amy to the nearest diner to call for help. But when Jeff fixes his car and meets Red again, he claims he never met him and doesn't know anything about his wife. When Jeff gets kidnapped, Red shows up and tells him he kidnapped Amy and wants 90,000 $ of ransom money. Jeff double crosses one of his associates, kills him and hides inside Red's truck that leaves for a house. Red lives there with his family and hides Amy in his basement. Jeff frees here and they escape. Red chases after them with his truck, but falls down from a cliff.

Quality made thriller with a sustained style that slowly builds it's suspense and intrigues more and more by the minute, refreshingly uses the old theme of a disappearance of a key person who motivates the hero to a drastic reaction. Kurt Russell impressively plays the main hero Jeff, even though he is described just barely enough to pass, while J. T. Walsh is great as the villain and this proved to be one of his last films. „Breakdown“ became a solid hit and truly honestly gave the public their run for the money, while one also has to give compliments to the director Jonathan Mostow for at least two brilliant scenes: one is when Jeff simply takes a gun and storms in the family home of his ransomer Red and the second one is when he puts him in his basement – the bad guy even turns to threaten him, but Jeff simply cuts him off by showing him down and closing the door. It's never pleasant to observe pure rage on film since it shows how primitive we still basically are when confronted with a drastic situation, and maybe the movie isn't as intense with frequent viewings as it was the first time, but it's still a cleverly made adrenaline rush even Hitchcock would be proud of.