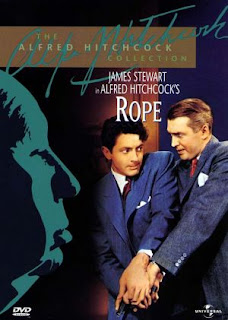 Young lads Brandon and Phillip strangle their colleague Brandon with a rope in their apartment and place his body in a chest. Their goal is that, just like Nietzsche's teachings, for them the norms of moral don't apply: for them a murder is art because they are 'superior beings' who can wipe out insignificant ones like David. They were inspired by professor Rupert thus Brandon organized a party to which he invited him, much to the dismay of Phillip who is afraid someone will discover the corpse in the chest. Among the guests are also Joan and Kenneth, David's friends, while Phillip placed plates and food on the chest so that nobody would open it. Rupert notices David's hat, but still leaves with the guests. 5 minutes later he returns to the apartment and questions the two: Phillip becomes crazy so Rupert takes his gun away and discovers the corpse. The shootout invites the police and Phillip and Brandon peacefully wait for their punishment.

An excellent experimental film, Hitchcock's first movie in color, "Rope" remains remembered as the 'first film shot in only one take', which isn't exactly true: admittedly, it has only 8 cuts (for instance, "Requiem for a Dream" has over 2,000 of them), but it still has them, yet they are cleverly hidden by having the camera zoom into a dark object, like John Dall's back, totally blacking out the lens/screen, and making a conventional cut into the next scene. That aspect of the direction if virtuoso made, and the actors must be given respect for delivering lines for 10 minutes without a mistake, but some other parts are weaker: there's a lack of humor, the static mood caused by placing the whole thing inside one apartment is amazing but not always suspenseful, while the ending is slightly uneven. However, as a whole, "Rope" is a bitter essay on the "superiority" philosophy revolving around Friedrich Nietzsche and his theory about people who are above others. It is also a chilling commentary on the consequences of incitement: Rupert at first advocates "Thanos"-style murder of "useless" lives who allegedly bother the society ("Personally, I would prefer to have "Cut a Throat Week", or, uh, "Strangulation Day""; "Think of the problems it would solve: unemployment, poverty, standing in line for theatre tickets..."), until in the end he realizes what he inspired. The ending deserves to be paid close attention to: Rupert remains waiting for the police with Brandon and Phillip, since he feels he should be tried himself for inspiring them to perpetrate the crime, even though it was tacit.