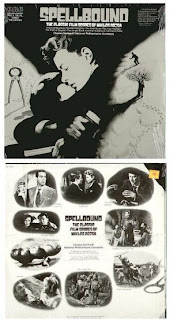 Dr. Constance Peterson is a psychoanalyst in a mental institution. One day a man shows up for whom everyone think is Dr. Anthony Edwardes, the new principal of the institution, who will replace the old one, Dr. Murchison. But it is soon discovered the real Dr. Edwardes is dead and that he just took on his identity. His real name is John but he can't remember anything and runs away. But Constance discovers the real murderer of Dr. Edwardes is actually Dr. Murchison and goes on to report everything, upon which he commits suicide.

The plots in Alfred Hitchcock's movies were often loose and shaky, ranging from unconvincing ("Strangers on a Train ") up to pointless ("The Birds"), but the sole fact that he made movies out of them that intrigue the viewers as a whole proves his gumption. The wavering logic of double identity found itself in drama "Spellbound", nominated for 6 Oscars out of which it won one for best score, but the central place in that film was taken by the theme of psychoanalysis and Freud anyway, which went in favor of Hitchcock's style who here felt like a fish in water. Especially inventive are visual tricks, like the one where the camera takes the subjective point-of-view of a man who takes directs his gun towards himself and shoots, or the surreal and creepy sequence of a dream inhabited by a man without a face and eyes on the curtain that was directed by none other than the famous Salvador Dali himself, giving the story a dose of insight into the dark, unknown territories of the human mind that humans themselves still can't quite understand because it's motives are unknown. In the end, it's as if Hitchcock himself states that fear is actually just the difficult realisation that life can be terrifying.