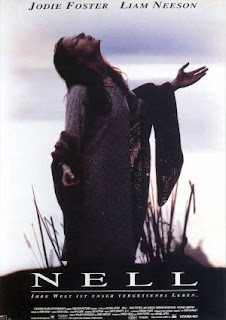 Doctor Jerry Lovell lives a peaceful life in the countryside of North Carolina, up until the day where he with the help of police finds a completely isolated and uneducated Nell, who doesn't understand a word he says because her recently deceased mother was paralyzed on one side, couldn't articulate words and thus teached her a distorted kind of language. Since Nell can't talk properly, Jerry and psychologist Paula Olsen are sent there to observe her in her house and teach her. The judge in the end declares Nell to be completely sane and capable of taking care of herself.

Very long, inert and rather boring melodrama "Nell" is pretty poor with that what those kind of genres should have, namely energy and astonishing power, but in those days it assured the main actress, the excellent Jodie Foster, a nomination for an Oscar and a Golden Globe. However, even though she impressively and hyper dynamically plays a person who can't distinguish between Phonemes, not to speak of Graphemes, while we observe her as she learns through time she ends up unintentionally naive and almost childish. Certainly there must be a better possibility for a dignified talent. "Nell" is an ambitious, even a little bit disturbing story since it tells how one person can learn everything wrong due to wrongly interpreted teachings from her role model, even turning at the end into a symbolic allegory of the raw wilderness not wanting to blend in into civilisation, but the movie is tendentious and not even the sequence in the courtroom didn't turn out to be unconventional.