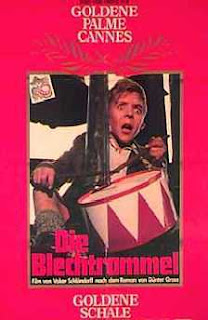 The little Oskar tells how his grandmother saved his grandfather by hiding him under her skirt. He was born in Danzig in the 1 9 2 0s. Oskar hates all adults and throws himself down the stairs at the age of 3, gaining an injury that stops his growth. He gets a tin drum from which he doesn't separate anymore and meets a dwarf entertainer in the circus. When he turns 14, his mother commits suicide and leaves him with the lovers Jan and Alfred. In '39 the Nazis kill Jan because he is a Pole while Oskar has intercourse with a girl. He joins the Nazis, but after the war ends, Alfred gets killed. Oskar throws away the drum and leaves in a train.

After the premiere of the anti-war drama "The Tin Drum" in 1979, an adaptation of the novel with the same name by Günter Grass, a large part of the audience was left in a shock: even though the film won an Oscar as best foreign language film and the Golden Palm in Cannes, it's a disturbingly black grotesque with heavy symbolism that has a lot of virtues, but also a lot of flaws. The main protagonist Oskar is shown at birth as an embryo in the womb of his mother, and since he stopped growing as a kid he looks like an 10-year old even at the age of 20, thus, among many radical things the director Volker Schlöndorff did to actually make this film possible, was to cast David Bennent who also had problems with growth. That also caused one very controversial sequence in which Oskar, as a 16-year old, has intercourse with a much taller girl, but since he looks like he is only 10 the whole thing is awkward and seems like pedophilia. As a character, Oskar is very confusing - without reservation or critique does he join the Nazi party, while his tin drum he always carries with him serves as some sort of a symbol for his immature views. The whole film is made on the verge of madness, without pathos or emotions, but what's the point of such disgusting scenes like the one where one of the protagonists pulls out a head of a cow from the sea in which numerous eels were caught? The point probably was to portray the dark period of German history as a nightmare, but measure must always be exercised. If at least there was more of such clear poetry like in the scene where Oskar uses his high pitch voice to make a crack of the glass cup in the shape of a heart.