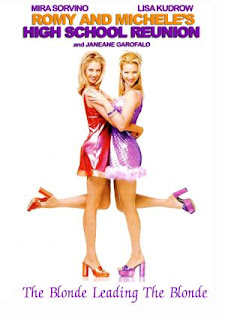 Los Angeles. Romy and Michelle and two hopelessly unsuccessful blond women. They live in the same apartment, are lonely and don’t have a real job. When they get an invitation for their high school reunion, they start having doubts: even as teenagers they weren’t especially popular, but now it’s even worse because they don’t have anything to talk about their unglamorous lives. Thus they decide to lie and present themselves as successful business women who invented post it. They borrow a red car but on their way they enter an argument and come to the reunion separately. There is also their colleague Heather and their friend, a former outcast and now a millionaire, who helps them out.

Moderately funny comedy “Romy and Michelle’s High School Reunion” neatly speaks about the contemporary problems of two underachieving girls at the high school reunion and has a distinct, adamant comic atmosphere, just without any deeper ambitions. It's a light comedy, without a real story or revolutionary ideas, even though it surprisingly found it's place on Ken Russell's top 10 best films of all time, acting as a neat critique of fake nostalgia of the "good old days" of school where there were always students that never spared the outsiders. Except for one totally off and silly dream sequence that plays in the distant future, the rest is competently made, rather realistic comedy with accessible humor, sweet and unusual charm, like in the finale where the two heroines and their friend, now a millionaire, conduct a ridiculous dance for three. Lisa Kudrow and Mira Sorvino charmingly play the title blond heroines with a soul, yet the best part was done by Janeane Garofalo as the grumpy, cynical Heather, who steals every scene she is in, and sometimes even those she is not in (because her absence is so strong it almost creates a vacuum).