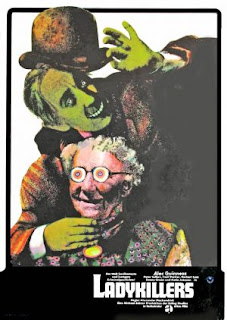 London. Mrs. Wilberforce is an old lady who constantly goes to the police station for trivial reasons, even sometimes just to apologize because her friend didn't see a UFO, but just had a bad dream. Since she lives alone in her home with her parrots, she gladly takes the mysterious Professor Marcus as a tenant: he introduces himself as a musician, but in reality he is a criminal. Together with his four friends; Claude, Louis, Harry and One-Round, he robs 60,000 pounds from a bank truck, puts the money into a baggage and sends Mrs. Wilberforce to get it. But just as they are about to escape, their money falls on the street and she figures everything. Since she is now a witness, they decide to kill her, but because of their greed they all kill each other in various accidents or ploys. With all the criminals gone, Mrs. Wilberforce goes to report everything to the police, but they do not believe her.

Macabre black comedy "Ladykillers" is in deprivation of charm, laughs and tenderness, but offers occasionally a hilarious fun because the director Alexander Mackendrick creates a wonderfully unsweet, wicked atmosphere for the tame 1950's revolving around an innocent old lady who doesn't know her tenants are actually criminals, which creates a few twisted situations: for instance, the sole surreal scene where the shadow of the sinister Professor Marcus, played unusually by Alec Guinness, shows up on Mrs. Wilberforce's door and rings, upon her parrot gets "goosebumps" by lifting it's feathers up, is great. When the old lady asks one of the 'musicians' where he studied music, he replies with: "I didn't study. It just came to me". When she asks Harry (Peter Sellers) to hold her naughty parrot while she gives him his medicine, the bird flies away through the window so she wants to call the police, which causes real panic among the criminals. The whole story is built upon contrast between various situations, it's slightly anecdotal and not consequent enough, yet it's inspiringly cynical and especially naughty in the surprising end.