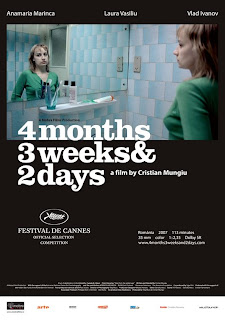 Romania, 1 9 8 0s. Student girl Otilia wants to help her friend, the 22-year old Gabita, get an abortion during the Ceauşescu regime, when it was forbidden. But a lot of complications occur: Gabita failed to make a reservation at the hotel, so Otilia has to spontaneously find a new one; the self-practiced doctor Bebe is angered because Gabita didn't show up in person; and on top of all, they don't have enough money, so Otilia decides to sleep with him to pay the debt. Gabita stays in the room with the instrument inside her. After the abortion is done, Otilia throws the fetus away in a trash can.

Winner of the Golden Palm in Cannes and nominated for a Golden Globe for best foreign language film, "4 Months, 3 Weeks, 2, Days" is an excellent example of grim 'slice-of-life' stories that feature realism: it's nothing extraordinary, every trick in it has already been tried out in cinema and thus it doesn't contribute nothing new to the genre, but it's so unbelievably gripping that it holds the viewer's attention up until the end. It's so simple, and yet so good at the same time. By insisting on long takes and even adding a slight criticism of the Ceausescu regime, the director Cristian Mungiu crafted an intriguing drama about abortion, resisting the temptation to put himself on either one's side, and also giving a neat little commentary about human incompetence that just turns a difficult situation into something even worse, embodied in the slightly dumb Gabita who makes too many mistakes. The story is filled with small details (in one scene, Otilia is caught off guard when a conductor asks for the passengers' ticket in the bus. She moves more and more forward in the bus, until some guy takes pity on her and quickly gives her his ticket, thus saving her) and surprising plot twists for such a one-note concept (Otilia voluntarily decides to sleep with the abortion specialist in order to pay for Gabita's abortion; Otilia at the birthday of her boyfriend's mother, all nervously waiting for Gabita's phone call) and 'dilemma' situations that will leave very few cold.