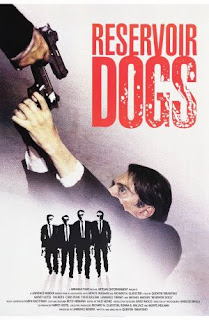 Gangster Joe Cabot and his son Eddie plan a 2 minute jewel robbery. For that task, they hire six unknown criminals and give them aliases Mr. White, Mr. Orange, Mr. Pink, Mr. Blonde, Mr. Blue and Mr. Brown. That way nobody knows anyone other's name and betrayal isn't possible. The robbery was well planned, but someone among them was a snitch since the police came up in just a few seconds: Mr. Brown and Blue were killed, while Mr. White brings the wounded Mr. Orange to their secret warehouse. When Mr. Blonde kidnaps a cop and tortures him in order to find out who is the rat, Mr. Orange shoots him because he is actually an undercover cop, Freddy. Then Joe and Eddie want to kill Orange but White defends him and they shoot each other. The police shows up and White kills Orange.

Quentin Tarantino's feature length movie debut is an impressive little crime film that revolutionized independent cinema and gave it a dose of class rarely seen before. Even today, "Reservoir Dogs" seem shocking and powerful, despite the fact that the story is rather partial and overstretched towards the end, and that's mostly due to the fact that Tarantino took some brave steps in showing the conventional robbery concept in an unconventional way: in the first scenes, one might wonder if the whole film is a comedy since the six main protagonist are in a bar and discussing about - believe it or not - Madonna's song "Like a Virgin", wondering if it's all about "a girl who loves big dicks" or "about a girl who finds a sensitive guy"! He hit the nail on the head with such original dialogues since real people really talk a lot of trivial small talk all the time. The next sequence contains a lousy slow motion scene of the six guys exiting and walking on the street, until the story cuts right to the moment after the robbery: basically, almost 80 % of the story is set around just one location, the warehouse the surviving criminals return to, while the sole robbery is never shown.

The rest of the film consists just out of little flashbacks that are there to give insight into some of the characters, and some work, while some, like the "Mr. Blond" segment, seem pointless. Considering Tarantino was previously just an 'ordinary' video store clerk, it's always nice to see how a 'nobody' somehow managed to make it and create 'something' important, but he wouldn't have done it without Harvey Keitel who was so amazed by the screenplay he even helped finance it and raise it's budget to 1.2 million $. It's obvious he avoided some spectacular solutions due to budget constrains, but the film is still very creative and enthusiastic the way it is, maybe just because some scenes were not shown and were left to the imagination of the viewers. The masochistic violence is, like in most of such films, not for everyone's taste - the sole infamous scene where Mr. Blonde tortures a cop and cuts his ear off is enough to turn some people away - but it's there to show that crime is a dirty job and that the tragic ending in many cases is unavoidable. The only thing to do is to conclude that Tarantino made better films in the 1 9 9 0s than in the 2 0 0 0s.