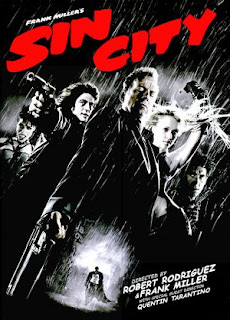 3 stories from Sin City: middle aged cop Hartigan is fed up that the police is still about the pedophilia of Junior, the son the wealthy mayor Roark. Thus Hartigan storms into the place of the siege, wounds Junior and releases the almost raped little girl Nancy, but Roark still puts him in jail as a revenge...8 years later Nancy is a 19 year stripper and falls in love with Hartigan when he gets released from jail, but she once again gets kidnapped by Junior. This time Hartigan kills him...Washed up Marv finds the killer of his lover Goldie and kills him...Dwight notices that his girlfriend is beaten up by the police office Jackie, but he gets killed from a prostitute. Dwight throws his body into the tar.

Eloquent critic Andrew Sarris concluded for „Sin City“ that he „liked the film almost despite himself“, which neatly sums up this unusual, trashy movie that isn't for everyone's taste, but has a great deal of energy and charm in courageously transforming the comic book into a movie. There were people who lamented about „Sin City“ because they consider that art has to always talk about honesty, moral, kindness and love, but ironically that's exactly what the movie is talking about – it's in contrast with it's expression and content. Namely, in all of the three stories here the heroes are good guys who fight against evil people (mostly politicians), except that they are living in a dark world. For instance, the first story in which the cop Hartigan (very good Bruce Willis) saves the little girl Nancy from a pedophile, but years later when she becomes a grown up woman and a stripper she falls in love with her hero, is surprisingly rather touching. Even the second story, in which Marv fight a battle against an evil politician is excellent, and only the last story seems to have caught the authors on wrong foot since the violence went too deep into grotesque. „Sin City“ is slightly overrated, seems artificial and exaggerated – truly, if one were to look at it just from the realistic perspective, one wouldn't enjoy it half just as much as with an open mind – but Frank Miller's artistic touch is very stylish and one has to admit one thing: he made a black and white film, and everyone in the US wanted to see it.

I really liked it. Some chapters weren't my thing ("The Big Fat Kill"), but "The Hard Goodbye" was masterful...