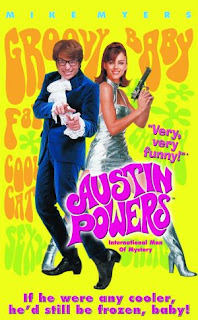 In the 60s, Austin Powers is a secret agent disguised as a fashion photographer fighting against Dr. Evil. One day, Dr. Evil places himself into a cryogenic freezing chamber, and so does Austin. 30 years later, in 1997, they both refreeze and continue with their fight, even though they have a hard time adjusting to the 1990's. Dr. Evil threatens to destroy the world if he is not payed 1 million $, but Austin and his assistant Vanessa manage to infiltrate his layer and stop him.

A satire on Cold War spy movies, populist comedy "Austin Powers" is a funny, though also a 'rough', convulsive flick. Truly, the story is crude and looks dated and deeply immature by today's standards, while some gags are tasteless, vulgar, revolving too much around genital mockery, and stupid, some of which, like Austin's yellow teeth and a giant wig on his chest that mocks the fact that every James Bond actor has to have chest hair, are a catastrophe. Mike Myers, in a double role of both the secret womanizing agent and the bad guy, thus made a much better and sympathetic role as the latter, Dr. Evil, who frankly has the best best gags: one of the most hilarious ones is, after he has been frozen back in the 60s and re-activated in 1997, uninformed about inflation, when he threatens to destroy the whole world if the government doesn't pay him - 1 million $ of ransom! The Ozon layer joke is also quietly hilarious. Even funnier is one genius, absolutely fantastic joke where Austin kills some henchmen working for Dr. Evil because they are evil - in every James Bond film, nobody would even look pass beyond their corpses, but here we have a sly insight into their private lives and the aftermath when their families are informed about their deaths: the wife of one of the killed answers the phone ("Yes, my husband is a henchman in Dr. Evil's private army. What?! Oh no!") and is informed that her husband died. In another scene, a couple of pals are in a bar drinking and waiting for their friend to finally show up, when they are also informed that he died in a "tragic accident working for Dr. Evil". Such sparks of inspiration partially justifies that this uneven film was actually made.