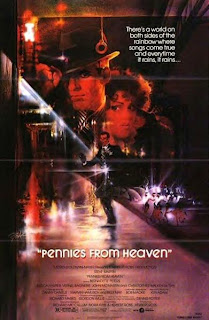 Chicago during the Great Depression. Arthur Parker lives in a poor apartment with his cold wife Joan. His work is selling sheet-music for 10 cents and when he tries to get a loan worth 1,000 $ in order to open his own store, he gets turned down. When he meets teacher Eileen he falls in love with her and fantasizes about her in his musical dreams. He quickly starts a relationship with her claiming his wife died. During his ride, he picks up a poor musician and pays him diner. Eileen gets fired and becomes pregnant but meet Tom who pays for her abortion and turns her into a prostitute. The musician kills a woman and the police wrongly arrest Arthur and sentence him to be hanged, while he just keeps dreaming about dancing with Eileen.

"Pennies From Heaven" is an unjustifiably forgotten film that offers comedian Steve Martin in an unusually demanding and serious role of poor Arthur, a symbol for every depressed person during the Great Depression in the 1930's. As a whole, the film is a peculiar drama in which the protagonist dreams in the form of musical scenes (but when he sings, he only sings in playback) which creates a few unusual solutions, like in the scene where a banker refuses to give him a loan but in the next scene he starts dancing with him and gives it to him anyway or when the wall in the bar 'moves away' causing the musician to stand up from his chair and dance in the rain. Director Herbert Ross inventively choreographs them (the bird perspective of dancers in a circle while a line on the screen 'wipes them away' to a next scene) but has problems in the unbalanced junction between innocent 1 9 3 0s musicals and slightly vulgar, raw and bitter drama, even though it works as a nice shift between perception and reality, while some characters stay unclear, even confusing. Still, as a whole, it's an impressive, slightly even brave film that was nominated for an Oscar for best costume design, sound and adapted screenplay. It was also nominated for a Golden Globe for best motion picture - musical or comedy and best actor Steve Martin, while the vibrant Bernadette Peters even won the award for best actress in a motion picture - musical or comedy.