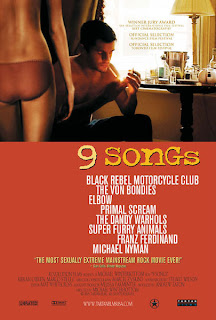 Matt, a British climatologist, is doing research somewhere on the South Pole while remembering his relationship with Lisa: she was a 21-year old American exchange student and met him at a concert. They had a passionate relationship in bed and liked to joke around. Yet with time they entered into an argument and she one day announced she will return back to the US.

"9 Songs" isn't a great film - it's too short, too chopped up and unnecessary mixed up with the sequences of 9 songs played during 9 concerts, thus seeming just to be shown in ellipses, not in real cause-consequence thread, while some moments seem rushed or chaotic - but it's still a good film that goes all the way to show how it is to be in a relationship. One of the finest virtues of this love story is that it's actually touching thanks to the irresistibly charming performance by Margo Stilley as Lisa and Winterbottom's inspiration to give her character a few sparks of wonderful playfulness. In one scene, she looks herself in the mirror and plays with her slightly androgynous looks by saying "Boy" when she stands up straight and manly and "Girl" when she 'pops out' her butt and leans forwards. She even puts some shaving cream on her palm of her hands and then imprints them on Matt's shoulder, leaving two white imprints that look like wings, then adding: "You look like an angel!" Some of those scenes look so real they seem to have come from real life, and quite frankly even overshadow the erotic scenes. If at least there were more of such examples of pure character chemistry, this could have been a fantastic film.