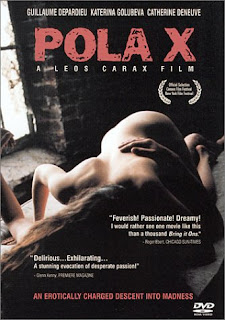 Pierre is a young lad who often drives with his motorcycle through town and lives in a giant, luxurious mansion with his mother and girlfriend Lucie. One day he discovers a girl spying on him and confronts her: she tells him her name is Isabelle and that she is his sister who lived in a different country abandoned by her father. Angered, Pierre leaves his whole life behind just to be with the poor Isabelle: they find a shabby apartment in Paris and he gets obsessed with writing a novel about the truth of life. The two of them even have intercourse, and Lucie joins them. Crushed by poverty and the rejection of his novel, Pierre kills his cousin, while Isabelle jumps in front of a car.

"Pola X" may be a unique experience that can only be understood through abstract thinking and not through conventions, but sometimes even conventions have their reason. It's not a coincidence that the audience was in turmoil after the film was screened at the Cannes film festival where it was nominated for the Golden Palm, since director Leos Carax deliberately tried to merge story and expression into one, both revolving around madness and wild desperation, not making it easy for a viewer to digest it: some have dismissed it as pure junk while some have embraced it as a great work. The story is really daring and has poetry, yet at the same time it also shows art movies in their worst edition due to banality, hermetic narration, heavy pretentiousness and increasingly pessimistic tone where some situations seem fake and too unreal: just take the scene where a taxi driver suddenly starts insulting Pierre's sister Isabelle for no reason at all, which results in a huge clash between them and commotion which even involves police, but the whole situation is written rather unconvincing, as if they are just arguing because they have to, and not because there is any reason to it, except for the director to constantly bring up his message about the difficulties of life. Or the one where a little girl from Eastern Europe randomly spots some older man, tells him: "You stink!" and then he slaps her, upon which she becomes sick and dies, which turns into a banally pathetic melodrama junk. Even the 'erotic' part doesn't hold water since the first intercourse scene starts some 80 minutes into the film, and proves to be the last one. And since it is depicted in dark, not much can be seen anyway. The same goes for the whole film, since it only gains more value through the abstract suggestion.
Grade:+
Posted by Marin Mandir at 3:15 PM