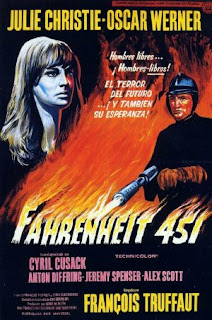 In the near future, books are forbidden because they cause sadness. Montag is a fireman, one of the members of people who burn books while his wife Linda vegetates watching TV all day, just like everyone. One day, Montag's neighbor Clarrissa mentions the beauty of reading which makes him curious. He starts reading and concludes he likes the books, which causes Linda to abandon him. When firemen storm into his house, he kills them and runs away into the nature, joining a group of people who have memorized books in their mind.

Movie adaptation "Fahrenheit 451", the first and only English language film directed by Francois Truffaut and his first one in color, is by some considered to be a failure due to the lack of technological fascination of the book like the absence of the sequence with the robot dog, but the director still made an excellent job. Instead of spectacular, he chose subtle changes in this futuristic world, while many scenes are intelligent - a fireman bites the apple in the apartment of a "reader" but gets a slap from his superior and thus spits it out; Montag starts reading a touching scene to the cold friends of his wife causing one to cry; in the group of people who memorized their favorite books there are two twins who represent volume 1 and 2 of a love novel - thus there is not much reason for aversion. Julie Christie, nominated for a BAFTA, plays both Montag's wife Linda and the rebellious Clarissa, which isn't so weird considering how Truffaut wanted to show how everything is relative, and it's an interesting idea in the exposition to have the opening credits spoken aloud, not spelled out by letters, while the whole story is a giant allegory of any given totalitarian regime that wants to forbid banal things in life, in this case books, because they might be subversive and disrupt it's rigid system, thus the only weak thing is the ending.