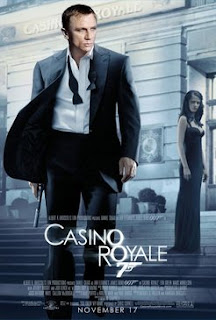 After killing a corrupt MI6 section chief, James Bond gets promoted to a 00 secret agent status. His first assignment leads him to Africa, where he kills a bomber and causes a chaos that attracts a lot of media coverage, infuriating his superior M. By analyzing the mobile phone of the bomber, he discovers his associate Alex Dimitrios on the Bahamas. At the Miami airport, he prevents a terrorist attack at an airliner. Discovering Le Chiffre is financing terrorists, Bond goes to Casino Royale in Montenegro with a female ally Vesper posing as his wife. He beats Le Chiffre in poker and gains millions of dollars. Le Chiffre tortures him in order to get his money back, but is shot dead by his debt collectors. Bond falls in love with Vesper, but she turns out to be a traitor, fancying him just to get the money. She gets drowned.

"Casino Royale", the 21st James Bond film and the first featuring Daniel Craig in the leading role, is a moderately refreshing upgrade to the tiresome franchise that features a few surprises, but in the end one can hardly say the authors reinvented the whole James Bond formula. The first half of the film is filled with action, which is truly suspenseful and dynamic, especially in the long sequence where Bond chases after a bomber through the construction site somewhere in Africa, but it's a standard Bond terrain seen already a thousand times with too many "hero gets saved in the nick of time" cliches, but the second, tranquil part, set in Casino Royale, really tried to gain some new ground - for the first time, Bond wasn't presented as a perfect agent, but as a careless, flawed and egoistic goon at moments who seems to be having problems keeping up the pace with his nemesis Le Chifre. Especially fascinating is the scene where Bond is at a poker match, drinks a drink and figures it is poisoned by Le Chiffre - he quickly leaves the table, all in delirium, and goes on to forcefully throw up in the bathroom, and then to seek help in the headquarters over the radio before his heart will stop. Craig is surprisingly good in the main role, as is Eva Green as his girlfriend Vesper, and the finale offers, despite a predictable plot twist, even some sort of a dramatic touch. After numerous James Bond films that all started to look the same to such measure that they resembled like one egg the other, this was a positive step forward, but not much was done to add a holistic touch to the formula and the grey mood didn't help either in this overlong film.