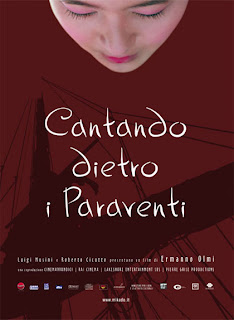 In a theater, an old sea captain tells the story of of the famous Chinese female pirate: a long time ago, admiral Ching was a pirate with strong crew, eventually becoming the emperor's admiral. But after the emperor's people betrayed and killed him, his angry wife, widow Ching, takes over the command on his ship and orders the crew to steal, but not to molest women. Out of revenge, she also attacks the emperor's ships and finds advice in the sea captain. In a bay, the emperor's ships surround her ship and send her a peace treaty. She accepts.

"Singing Behind Screens" from acclaimed Italian director Ermanno Olmi is an interesting attempt at a 'story inside a story' - revolving around a sea captain in the theater telling the story of a female pirate - with occasionally contemplative monologues, like the one where the heroine says: "The Moon reflects itself in every puddle, but there is only one Moon", and poetry, even though the overall film is nothing special, without passion, energy or memorable moments. Even for an art film, it's thin, without a clear intention what it wants to say, while the ambitious combination between pirate film and theater doesn't cross the framework of contemporary gimmick. Jun Ichikawa is very good in her minimalistic role of the female pirate leader, but it's interesting to note that the star of Italian art circles, Olmi, gave the star of Italian pulp circles, Bud Spencer, the role of the narrator and the protagonist on the ship who helps the heroine, which gives the film a special charm since it was always fascinating to watch comedians make a 180 degree turn and do a drama.