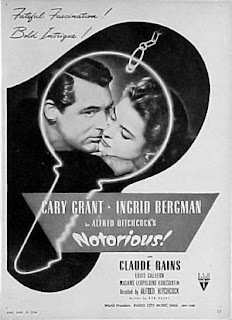 John Huberman was pronounced guilty of charge of collaboration with the Nazis. His daughter Alicia feels ashamed and resigned, thus meeting the mysterious T. R. Devlin on one party. He explains her he is an agent and that her father committed suicide in jail. He begs her to spy on ex-Nazi Alex, one of her father's friends, on Brazil's territory. Alicia loves Devlin, but when Alex proposes her, she goes along partly to play her role well, partly to make Devlin jealous. When she finds Uranium in vine bottles, Alex realizes she is a spy and starts slowly poisoning her with fake coffee. Devlin storms in into the mansion and finds her sick, thus bringing her to a hospital.

"Notorious" had many problems during its production, thus such convulsions are noticeable in the finished result, even though it is a quality film. Alfred Hitchcock inventively directs the story with the use of unusual camera angles (subjective point-of-view of the heroine Alicia when her hair blurs her sight area; leaning the camera upside down...) but the unclear story in which Alicia spies on Alex even though she doesn't know why somewhat deprives its energy. The reason for that lies in the fact that Hitchcock and screenwriter Ben Hecht wanted to originally show the bad guys constructing an atomic bomb, but scientist Dr. Robert Millikan refused to cooperate, and thus the plot backbone was just reduced to some Uranium hidden in vine bottles, which producer David O. Selznick found to be "one of the dumbest movie secrets" he ever heard, selling the whole crew to RKO Radio Pictures. Still, Hitchcock crammed enough virtues into the film, like the daring move to film the 'longest kiss shown on film', a two minute long scene between Bergman and Grant who constantly kiss but then stop, and then kiss again, since back in those days the censors forbade that kisses last more than a few seconds, but today that all gives "Notorious" that special 'naughty' charm, as well as the unusually creepy finale in which the spy heroine finds herself in a psychological trap.