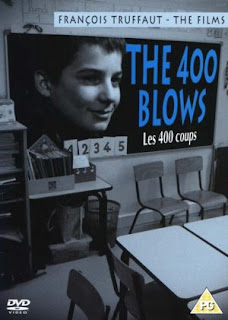 Antoine Doinel is a little boy who doesn't have any luck in his life. He has bad grades in school while the teachers hate him, thus he often avoids class. His father is a secretary who married a blond after his wife died and is reserved towards Antoine. The boy's only friend is Rene. Antoine runs away from home but returns and steals his father's typewriter, ending in a reformatory and work camp. Still, he runs away towards the sea.

Francois Truffaut can by inventive direction alone hardly cope with the genius Godard, yet he still made some powerful films. "The 400 Blows" is a seemingly normal, average film, yet it's realistic, has ostentative ideas and a free narration, turning into a film that defined the French New Wave, while it's especially interesting because Truffaut for the first time introduced his character Antoine Doinel (played always by Jean-Pierre Leaud, who was only 14 years old during the principal photography) who later on appeared in 4 more of his films. The story has a lot of humor: the teacher starts writing a love poem on the blackboard during the class while the students nonchalantly start joking around by hugging themselves and releasing kissing sounds, causing him to reply in anger: "France has a poor future in 10 years!" Antoine runs away from class and walking by the street stumbles upon his stepmother, but luckily since she is in company with her lover, she doesn't say anything. The father also always delivers numerous corny lines ("This hole is bigger than the sock!") and also performs a few 'controversial' acts, like when he grabs his wife by the chest, something which was rarely shown in the 1950's. The film is definitely overrated since it's isn't as fresh today as it was back in 1959, it's rhythm is lethargic, but it's still a classic dominated by a strong, tragic ode to destroyed childhood.