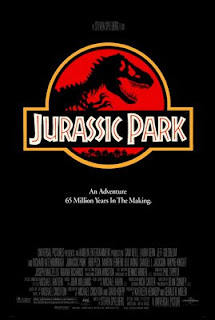 Paleontologists Alan Grant and Ellie and chaos theorist Ian Malcolm are invited by millionaire John Hammond to fly off to a Pacific island where they will experience a sneak preview of his new amusement park, 'Jurassic Park'. Soon, they are amazed to find out Hammond's crew managed to clone living dinosaurs who live there in some sort of a zoo. But a rival company hired programmer Nedry to shut down the park's security system and steal the dinosaur embryos. Combined with a storm, the dinosaurs break loose and start chasing the visitors. Still, Alan and his friends manage to escape from the island.

Whatever monster Steven Spielberg decided to put on the big screen, he always managed to 'decipher' it and make it fit into a great movie, and thus "Jurassic Park" is one of the few movies of the 20th century where dinosaurs on celluloid did not turn out to be trash, but art. One of the most multilayered and accessible Sci-Fi movies of the 90s also became one of the most commercial ones—it sold over 90,000,000 tickets at the American box office, making it the 15th highest grossing movie of the century—which prompted some critics to lament how it is just a simple, mainstream crowd-pleaser, but if the audience wants to watch dinosaurs on big screens, what's so wrong in indulging them if the movie is of such quality? The scenes alone where the human protagonists enter the Jurassic park—and we, the audience, with them—and encounter a Brachiosaurus walking through the meadow or a Tyrannosaurus rex that escapes from its fence while their cars stopped driving on the road, are of such awe and magic that they send shivers down the spine. By adapting Michael Crichton's novel, it all could have went wrong, but it did not: a very clever idea about the cloning of dinosaurs, slightly instructional and contemplative towards the abuses of genetic manipulation with an excellent combination of humor and masterful conjuring up of characters and locations (Sam Neill's character Alan shines in a small comical moment when he scares the kids that he was electrocuted by the malfunctioned fence). Thanks to a few delicious details (a 'fisheye view' of the Brachiosaurus in one scene), Spielberg reached even the ideal of "King Kong". Maybe it all dissolves into repetitive action towards the end, but it always maintains its authority, so that it is not just superior towards other monster movies compared to its special effects, which set standards back in the 1993 and have been rarely matched since.