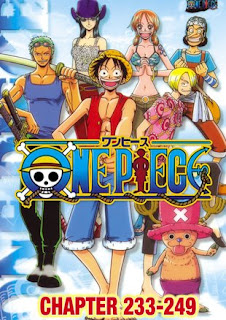 A boy called Monkey D. Luffy got the powers of strength and stretching of his body when he ate the 'Devil Fruit'. His goal in his life is to become the King of Pirates because he was impressed by his deceased childhood hero Red Hair Shanks. He travels with a ship through the 'Grand Line' to discover the legendary treasure One Piece. On his journey he is joined by cook Sanji, swordsman Zoro, double crossing Nami, lying Usopp, talking reindeer Chopper, Robin, Franky and Brook. They arrive at various countries that are oppressed by bad guys, so they beat them up and free the people.
Exceptionaly stylish and aesthetic, at first hardly adjustable for viewing due to the heaviness of abstract symbols, "One Piece" will probably be much fonder to the anime lovers than trashy "Dragonball", "Fist of the North Star" or "B't X" where the protagonists also encounter seemingly unstoppable, super strong bad guys who humiliate local inhabitants, but then manage to beat them and save the day. With almost 400 episodes, "One Piece" is one of the longest and best soap operas - keeping in mind that it also isn't made for kids, it's a matter of a quality, but bizarre series that's often in oscillation of the level, especially in the absurd episodes, like the one on the dinosaur island or in the entrails of a whale.

If there is something that director Konosuke Uda manages extremely well, then it's his unbelievable rhythm for action which is a syntax and homage to Leone's "Once Upon a Time in the West", Hong Kong's action movies and "7 Samurai". For instance, the evil fish-man Arlong is terrorizing a village since he is 7 foot tall and simply too strong for anyone to even dare touch him. But Luffy simply breaks his wall in the castle, storms in and hits the "untouchable" and his associates. It all ends in one of the best fights of the series: Arlong then throws him in the water with cement shoes. A shark-man hits Sanji and throws him 50 yards away, yet he just stays lying there in epic calmness, then puts a cigarette in his mouth and slyly stands up again. Zoro is using 3 swords to fight and injure the octopus-man who has 6 swords. When the octopus-man jumps into water to attack Sanji, the water pressure enhances his wound and eliminates him. It's really a fascinating series, but after 300 episodes the viewers simply loose their concentration and interest for the heavily overstretched, lingering, albeit fun story.