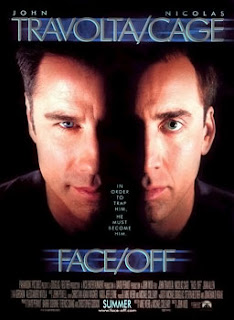 Sean Archer is an FBI agent who hunts for terrorist Castor Troy who once killed his son. In a vicious showdown, the police captures Castor, who falls in a coma, and his brother, but they don't know where they planted their next bomb. In order to discover it's location, Sean agrees to participate in an operation where doctors implant him with the face of Castor to take his role and get information from his brother. The fake Castor goes to a prison, but the real Castor wakes up from a coma, takes Sean's face and leaves him in prison. The fake Sean deactivates the bomb, but the fake Castor escapes from prison and contacts his wife Eve who believes him. The fake Castor kills the fake Sean. The real Sean adopts Castro's son and returns to Eve.

In the whole bunch of Hollywood action garbage this movie at least stands out a little bit with it's philosophical subtext, but the sole idea about an agent and a criminal switching their identities wasn't completely exploited. The first half annoys with John Woo's mannerist style and pretentious ideas (the absurd high-tech prison where convicts are wearing magnetic boots to walk slowly), yet it has a few original action sequences, like when Castor (Cage) throws a bottle with sulfur acid in the air, shoots it and makes it disperse it's drops all over cops. The second part, though, is much more interesting because it doesn't suffer from entropy and portraits how the evil Castor feels in Sean's body: at first he enjoys sleeping with his wife and giving cigarettes to his daughter, but develops some emotions when he visits the grave of the son he killed, figuring how horrible it is by "walking in his enemies shoes". That contemplation about the relativity and absurdity of human destiny saves the movie from it's obvious cliches, like the "classic" one how the two rivals can't hit each other even after they fired a thousand bullets at each other.