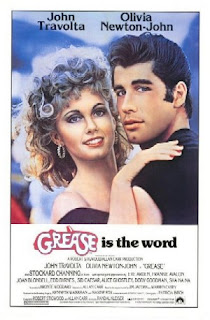 California, 1950's. The young lad Danny meets Sandy on the beach, but she tells him she must return to her Australian homeland. Danny returns to his high school for his final year, hanging out with the vain guys from the group "T-Birds". But Sandy enlists in the school anyway, disappointed by the fact that Danny is such a cold macho. He apologizes to her and they start a relationship. At the same time, Sandy's friend Rizzo starts a relationship with a guy from "T-Birds" and is relieved when her supposed pregnancy turns out to be a false alarm. At the end, the school is out and all students start to dance.

"Grease", a dynamic teenage movie full of iteration in fun, grossed 181 million $ at the US box office, becoming the 4th most commercial movie in the 1970's and the most commercial musical of the 20th century. The love subplot is rather clumsily set up, yet "Grease" has enough unusual touches to lift itself up from the label of conventional musicals - the shrill touch is already felt in the animated opening titles in which Travolta's cartoon version puts grease on his messy hair, Newton-John's wakes up in her bedroom full of deers whereas Channing's dresses in a sweater with a 'too high' collar. Many jokes are somehow stupid (it's never clear why Danny suddenly speaks with Sandy in such a mocking manner, like when she asks him: "Danny, you changed!" and he tells her: "Maybe I have a double. Put a search-add for him in the newspapers", just to make himself look 'cool' in front of his gang), some are brave (3 guys show their naked butts in front of the cameras on the school dance so the principal tells the unknown perpetrators to surrender since she sent the photos to experts in Washington anyway) whereas many songs and dances are excellent, as well as all the actors who portray nervous teenagers in the 1950's. Despite flaws and a nonexistent story, this is still a movie full of life and agility.