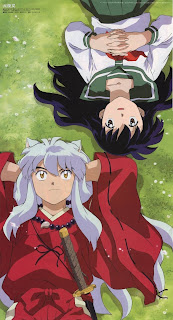 Kagome is a normal teenage high school girl who lives with her little brother in the temple of her grandpa. One day she discovers a magical portal in her well that brings her to the medieval Japan. There she finds the half-demon half-human Inuyasha who morns after his love Kikyo who hated him before her death. But Kagome is the reincarnation of Kikyo's soul and discovers that the couple was set in feud by the jealous demon Naraku. Kagome and Inuyasha are joined by Shippou, monk Miroku who has a black hole on his palm and warrior Sango and head off to find the magical jewel, as well as Naraku.

"Be honest. You enjoy my company, don't you?" asks Kagome Inuyasha at one certain point while he is carrying her bicycle up the hill. For some unexplainable reason that conventional monologue is special. "Inuyasha" sounds like a stiff and stereotype anime, but the first sight is deceiving. It's not just an anime, but an anime and a half! The first 3 seasons of "Inuyasha" are a shining anime, a triumph of classic narration and gentle romance, especially since its author is Rumiko Takahashi. The story, besides allegories on racism, friendship and lost love, is filled with shrill situations and excellent characters, virtuoso mixing humor and emotions. One of the marathon running gags is the one that the teenage Kagome constantly travels back and forth between the medieval and modern Japan, so her grandpa has to make up random excuses for her absence in school (rheum, diarrhea...) which start going on her nerves. Thus, one cute guy in class asks her out for recovering but she turns towards her three friends and laconically asks: "...Is he hitting on to me?"

Another great moment is when Inuyasha is exhausted by poisons and admits to Kagome that he lied when he told her she is ugly, and when he later on almost kisses her she starts stuttering in her mind: "W-w-what was that...?" But one of the most poetic moments in the whole show, and one of the most beautiful moments in the history of the 21st century anime, is the one where Sesshomaru, the bad guy, was exhausted in the woods. Rin, a little orphan girl, saw him and wanted to help him. She went to her village to get him some food but the cruel villager's beat her up. She still managed to get Sesshmoaru some food but he declined. Yet he asked her where she got those bruises and she was happy he noticed her effort. Later on Rin was killed in the forest and Sesshomaru accidentally found her dead body. After a little thinking, he took his magic sword and, despite being evil, brought her back to life. That moment is something that you should see before you die: it's not just beautiful, it's unexpectedly beautiful. Truth be told, the authors don't cope well with slightly tiresome action sequences involving demons while the story is heavily overstretched and is left with an unfinished end, yet whenever there's a moment involving romance and drama, they are walking on air. Even the biggest misanthropes will have a difficult time resisting such beautiful achievements.