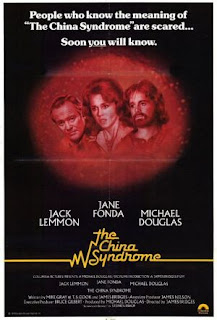 California. TV reporter Kimberly and her cameraman Richard go to the Ventana nuclear power plant to do a few routine reports on energy. Suddenly, there is an earthquake and the reactor staff members, led by Jack Godell, panic and barely manage to prevent a catastrophe by stopping a meltdown of the reactor core. Richard has the whole event on tape, but his producer doesn't want to air it on TV. Jack does some research and discovers the plant is unsafe since the company gave them fake water pump parts, yet the investors want to start it again because they don't want to waste millions of $ on examination. Jack locks himself up in the control room and does an interview with Kimberly, but a SWAT teams breaks in and shoots him.

For everyone who ever doubted that work inside a nuclear power plant could not be an interesting enough theme for a feature length film, "The China Syndrome" proves that it can: despite the fact that it at first seems that the story can't hold it's concept the whole time, thanks to a focused contemplation and absorbing direction it manages to keep it's level the whole time. It's not an anti-nuclear film, but a pro-safe nuclear power film, an engaging story with a strong social message about the flaws of nuclear energy and the greed of the people who run it but won't spend money until it goes defect. It's not really a thriller since it's poor with suspense, yet the sole sequence at the beginning where there's an emergency shutdown of the reactor (Jack tells them to turn off the loud alarm because "nobody can think at that noise"; Jack taps the glass cover on the gauge and the stuck needle "wakes up" and drops rapidly to indicate that the water level is actually far too low, and the core has almost been uncovered) is full of passionate details and rare insight into the work of those staff members and the system of their business. Maybe the ending is slightly melodramatic, maybe the film is too mild at moments, yet all the intentions were done right and were carefully knit into a harmonic whole. Jack Lemmon is great as the suspectful supervisor Jack Godell and was nominated for an Oscar and a Golden Globe, while he won a BAFTA - together with the leading actress Jane Fona - and the best actor prize at the Cannes festival.