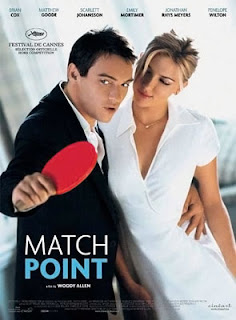 London. Sleazy Irish opportunist Chris quits his career as a tennis player and works as a tennis coach in a noble club. There he meets the rich Tom and starts dating his insecure sister Chloe. Through her, he gets a job at her father's respectful company. But then he meets Tom's girlfriend, the blond Nola, an unsuccessful actress, and gets attracted to her. When Tom leaves Nola, Chris loses touch with her and marries Chloe. Some time later, Chris meets Nola again and starts a wild affair with her. When she gets pregnant, though, and threatens to jeopardize his rich life with Chloe, he organizes a fake burglary and kills her. The police don't have anything on him and Chloe gets his child.

"Match Point" marked Woody Allen's return to his good old shape, but, ironically, in a way and style that are completely different than his previous works. This is an unbelievably dissimilar film, a completely untypical Allen, a bitter crime drama without the director's trademark neurosis, complaints about life, philosophical babble, New York locations or even humor (only here and there a few exceptions occur, like when Chris and Tom exchange this cynical dialog: "My father found Christ when he lost his legs". - "Sorry to tell you this, but it doesn't seem like a fair trade to me") since it seems that the once great comedian lost his optimistic touch by encountering the unfair circumstances of life. His main antihero here, Chris, is a sleazy opportunist and social climber who manipulates every human possible, especially from the rich class, to gain their trust and secure himself a cushy life. That's why the finale is so shocking and authentic, because he had to choose between a poor woman he loves and a rich woman he doesn't love, and he actually chose the latter, which is so crushing. Yet, unlike his previous films, Allen here took a very direct, harsh approach that works better towards the mainstream audience than his previous "geeky" films that had to be deciphered and were appreciated mostly by the intellectual circles. It's maybe too long and too proper to be really gritty, but it seems so mature it's a treat, while Scarlett Johansson is great.