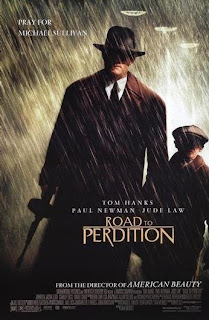 Mike Sullivan works as an assassin working for the mobster John Rooney. That's why he keeps his job a secret in front of his family: his wife and kids Peter and Mike Jr. But Rooney's son Conner is jealous of Mike. One day Mike Jr. spots his father at work so Conner decides to use that as an excuse to get rid of him. He kills Mike's wife and Peter, and then hunts for him. Mike and Mike Jr. manage to escape, but are hunted by assassin Maguire. Mike eliminates Rooney and Conner, managing to bring Mike Jr. to town Perdition. But Mike is then killed by Maguire.

Excellent "Road to Perdition" is a real example of a thoroughbred modern noir film, a highly stylish elegy that is one of the rare underrated movies by Tom Hanks, here in an untypical role of a "bad guy". Director Sam Mendes shapes the "Road" much better than his sometimes stiff and pretentious first film by symbolically describing the increasingly more intimate approach of father Mike and his child Mike Jr. - in the first half, their relationship is distanced and Mike Jr. often sees his father from a hidden place (through a trunk or a hallway), but in the second they start becoming close and are more and more often in the same shot together. Some sequences are pure poetry (the sequence without sound where Mike shoots Ronny's bodyguards in the rain; the finale on the dreamy beach that offers salvation) while the cinematography offered fantastic noir images. Among others, the brilliant Paul Newman delivered his final movie performance for which he was nominated for his last Oscar, Golden Globe and a BAFTA as best supporting actor.