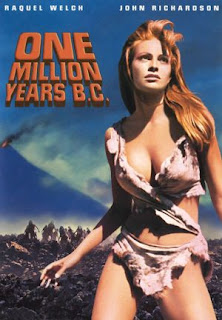 Prehistoric Earth. A tribe of cavemen capture a boar in a trap and eat it. But one caveman, Tumak, has a fight with his father, the tribe leader and thus gets expelled from their cave. He wonders through various valleys, encountering a giant Iguana and a spider, until he finds a tribe consisting of all blond cavemen. One cavewoman, Loana, falls in love with him and follows him after he once again causes trouble with one tribe member. They return to Tomek's tribe, where a Pteranodon captures Loana, making him think she is dead. But she returns and searches with Tomak for a new homeland after a volcano breaks out.

If there was ever a Ray Harryhausen film that had an element that seized more attention than his amazing stop-motion effects, then it was Raquel Welch in "One Million Years B.C.", a simple fantasy adventure whose poster of the attractive actress in a fur bikini actually became more popular than the film itself. Disregarding the narration at the beginning, the whole story has no dialogues except for the primitive cavemen gibberish, which probably made it very easy for the actors to participate in, since they didn't have to learn any lines, causing this unusual and peculiar movie to become almost experimental, yet the crude execution of the crude cavemen mentality and backward story build up of the backward events didn't result in much. The conflicts and drama in the story never seem convincing but always act as a 'plot device', which is one reason why the only interesting elements are those of Harryhausen's dinosaurs fighting—like an Allosaurus attacking the cave of the tribe or a Ceratosaurus fighting with a Triceratops—and in this case the enchanting Welch gracing the screen with her sweet look and beauty. Pretentious and rough, Don Chaffey's film is silly, but it's at times so much fun it's hard to deny its status of a cult 'guilty pleasure'.