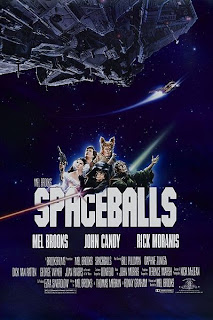 The evil commander Dark Helmet uses his spaceship to try to kidnap princess Vespa in order to force her father to give him the code of the protective layer of his planet Druidia, so that he can suck all the fresh air from it for their planet Spaceballs, ruled by President Skroob. But the sloppy Captain Lone Starr and his friend, half-man half-dog, Barf, use their space-van to save her and crash to a desert planet. There they meet magician Yogurt who learns Starr the power of the Schwartz. Just as the spaceship is about to suck the air from Druidia, Starr sets it's self-destruct mechanism and marries Vespa.

Mel Brooks' sense for humor started to decay somewhere in the 80s and thus it comes as no surprise that his parody "Spaceballs", that spoofs "Star Wars" repertoire, wasn't as satisfying as expected, but even in his best form Brooks' humor seemed crude and vile in numerous of his movies. He grasps for too much stupid ideas and heavy satire, which makes the film catastrophically unimaginative at times, yet despite the fact that many comedians were wasted (John Candy seems to just "walk through" the film), some were not, such as Rick Moranis, who on the other hand is in absolutely great shape and steals every scene as Dark Helmet, while some of the jokes are really funny, especially at the beginning when the opening crawl rolls in space until it states: "If you can read this, you don't need glasses" or when the long Spaceballs spaceship is passing hilariously long and slow through the screen for over a minute (!). The special effects are surprisingly amazing while some moments have that spoofing point (among others, John Hurt reprises his role at the end when an "Alien" exists from his stomach at a 'poor hygene' diner), yet they cannot hide the fact that the story is forced and an uneven, mixed bag, turning only into a solid (cult) 'guilty pleasure'.