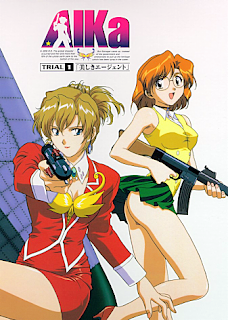 In 2016 some disaster flooded Tokyo, so friends Aika and Rion earn a neat profit thanks to their submarine that searches for sunken treasures. While Rion wears glasses and has a temperament character, Aika is quiet and has a secret - thanks to an unusual bustierre she can gain super-powers. When they get the assignment to find Lagu, a substance that can change the Earth's climate, the get arrested by some commander called Hagel. He wants to wipe out humanity from the face of the Earth and hide in his spaceship, only to later on repopulate it himself with his crew that is composed exclusively out of women. In a dangerous mission, friends save Aika with a Jet, while Rion stays on the spaceship. When Aika returns, she saves her and destroys the spaceship with an explosion.

Animes have some criminal euphoria in them combined with an unusual blend between the cartoonish humor and adult story, which is one of the reason why many not familiar with such genre don't understand their style or don't know how to react. The characters often have some esoteric harmony to them, especially when the main protagonists are shrill heroines, with a few allusions to intercourse - or in "Agent Aika's" case, a lot of allusions thanks to all the "fan service" shots of underwear - which give it a special agility. As with many not so serious anime OVAs, "Aika" also lapses behind higher expectations, but after some time the viewers will not be bothered by it if they just adapt to it's light tone and numerous jokes, which shouldn't surprise because the anxiety of the future has been replaced with an cheerful and funny "girl saves the world" story. Rion, the temperament second main heroine with glasses, especially stands out as a symbol of a diligent woman in "embarrassing situations", like when she is locked up naked in a room and has to sneak out by squeezing out through the narrow ventilation shaft or in the golden, hilarious moment where she "exposes" Hagel by telling him that he wants to repopulate the destroyed world with his female crew just because "he is a man who only thinks about one thing".