What Is a Man Without a Mustache? 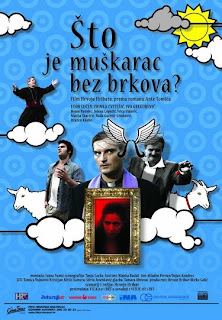 Dalmatian Zagora. The young Tatjana becomes a widow when he husband dies in an accident working for some German construction company. Tatjana doesn't say a word for the next 13 months, until she finally tells the dashing priest Stipan that she fell in love with him. He is hesitant towards such an idea, but has feelings for her. At the same time, 'gastarbeiter' Marinko returns home with his teenage daughter Julija who falls in love with Stanislav, a Haiku poet. When Stipan's twin brother Ivica, a general, comes to town, Tatjana decides to sleep with him as 'compensation'. 13 months later, Stipan returns back from a mission in Africa, spots Tatjana with Ivica's baby and they become a couple.

The concept of a temperamental woman falling in love with a Catholic priest sworn to Celibacy is a notion that really tickles the imagination—in one sequence Tatjana summons the young priest Stipan for a confession, and then slowly, melancholically admits her "sin": that she fell in love with him, but that is already enough to put a small smile on the viewers' face. Still, now that I saw the whole movie, from start to finish, it seems as if that small, tender magical moment got "drowned" in all the hectic, hasty and wacky details throughout. "What Is a Man Without a Mustache?" is director Hrvoje Hribar's adaptation of Ante Tomić's humorous novel of the same name, which proves that Croatian literature has potentials, and even though the movie is flawed, it's still a very solid piece of Croatian cinema with a couple of charming scenes. If the viewer can get pass the first 10 minutes, which annoy with irritating music, and forget the fact that the subplot involving 'gastarbeiter' Marinko and his teenage daughter Julija is rather unnecessary, one can find an amusing comedy here—the scenes where Julija (fantastic Jelena Lopatić) crouches in the nature to "take a leak", spots a bird and then all out of a blue the young Stanislav, who was sitting on a nearby branch all the time, tells her that bird is Carduelis Carduelis and jumps down to the floor to 'join' her in crouching is as funny as the one few moments later, where Julija, who was born on German soil, reaches between Stanisav's legs and tells "How beautiful is my homeland!". It's a chaotic film, but fun, while Zrinka Cvitesic is simply brilliant in the leading role as Tatjana.