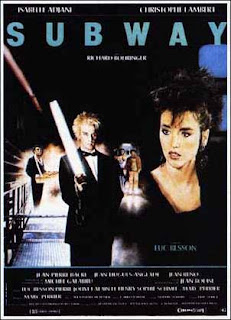 Small time crook Fred stole an important document from a safe of a politician and fell in love with his wife Helena. Running away from the police, Fred hides in a subway. There he meets unusual characters who live bellow the surface: the strong Bill, a drummer, a roller...Since he has a feeling Helena loves him too, Fred demands to see her instead of getting money for the document. He robs the bank guards and organizes a concert, but gets killed by the police.

For a cult movie of such an ambivalent, almost negative reputation, "Subway", Luc Besson second film, is a surprisingly good, hybrid romance that plays out bellow the surface, in a subway. Christopher Lambert is today rightfully considered an infamous artist, director Luc Besson unrightfully, but together they made Lambert's best and Besson's 3rd best movie of their careers, a humorous "underground" story full of elegance, wonderful visual style that reminds of some surreal anime's or a Godard picture. Many scenes are quite original (Jean Reno plays a drummer who beats with his drumsticks on the subway wall; after a failed hunt on the roller, the commissioner spots him in the same train when returning home) and soften the rather overstretched moments filled with mannerisms.