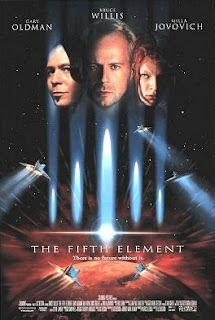 On Egyptian soil, archaeologists discover ancient writings describing the arrival of a Great Evil every 5.000 years. An alien ship then lands and prepares the 5 elements needed to stop the catastrophe. 300 years later, in 2263, the Great Evil in the shape of a planetoid is heading towards the Earth to destroy it. By cloning the remains of the shot down Alien ship, scientist regenerate Leeloo, a woman who escapes and falls into the cab of the taxi driver Korben Dallas. Even though the evil Zorg cooperates with the Great Evil, Korben and Leeloo manage to find the 4 elements and the last one, love, thus saving the world.

French director Luc Besson gained his fame through his dark style, but in "Fifth Element" he proved that he can also make a very fun movie with many jokes on the expense of the typical "average guy saves the world" story. That French film shot with American actors cost 70 million $, becoming the most expensive European movie of its time, yet it also became a huge success. It's an unusual techno flick with bizarre ideas that will split the viewers due to it's strange special effects, set designs and costumes which some will find surreal and others cheap and stupid; the shots are fast and chaotic, just like a picture card, yet it's undeniable that the action and the jokes are wonderful. It's too bad that the movie can't brag with anything new, since it just leans on the standard plotline, but it has enough funny moments, like the scene where one of Zorg's henchmen phones him and tells him he failed to get aboard the spaceliner to Fhloston because it's "impossible to get in" while the movie then mockingly cuts right to the scene where Priest Cornelius smuggles himself in or the scene where Zorg opens the box where the elements are supposed to be, smiles, closes it and says: "It's not there". All in all, it's a flawed film and Chris Tucker's performance is terrible, yet it has one of the greatest movie quotes ever: at the beginning, someone says: "Time isn't important, life is". An hour later, in the middle of the film, someone else then says: "Money isn't important, time is". If one just combines those two together, it's one of the most clever messages of the 90s, but many viewers didn't even notice it.