My Stepmother Is an Alien 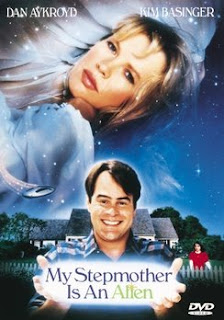 Steve Mills is an astronomer and a single father who lives with his daughter Jesse (13). One stormy night Steve sends a message from his observatory which reaches the Magellan cloud in just a few seconds. As a result, alien Celeste arrives from that galaxy in the shape of a blond woman. Her planet is in danger and the only way to save it is to repeat the signal from the observatory. Thus, Celeste marries Steve, but gets exposed by Jesse. Steve sends another signal but Celeste's bag decides to destroy Earth. Celeste prevents that and stays with Steve.

Canadian comedian Dan Aykroyd actually shot two masterworks in his career ("The Blues Bros.", "Driving Miss Daisy"), but as a whole, his movie opus oscillates too much so that he never quite reached the highlights of his colleagues, like Murray or Hanks. Among the misguided movies of the golden 80s in which he starred in is also "My Stepmother is an Alien" that is today remembered solely for the fact that Alyson Hannigan and Seth Green appeared in it together for the first time as kids, before becoming stars of the TV show "Buffy". Still, "Stepmother" isn't by far a bad film: for instance, the opening credits where yellow-blue "fogs" travel through space is fascinating whereas some of Celeste's improvisations in the world of humans are sympathetic (since she doesn't know what a kiss is she observes scenes from movies and imitates them with Steve. Thus, in one animated film a kissed puppet "spins" with its eyes and Celeste is hilarious as she tries to mimic it). But, alas, the majority of the story disappoints since it's neither funny nor smart, but just embarrassingly bizarre whereas the heavy end hopelessly tries to insert some suspense into it. Wilder wouldn't either never direct such a film or he would send it for "repair".