World on a Wire 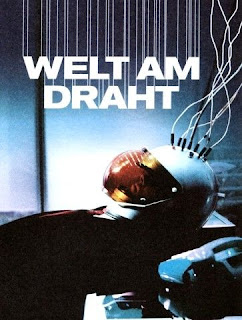 The Institute for Cybernetics and Future Sciences (IKZ). The technical director of the program, Vollmer, is agitated and wants to announce something important to the security advisor, Lause. However, Vollmer is soon found dead, electrocuted in mysterious circumstances. His successor is Fred Stiller, who announces the new project of the IKZ to the press: Simulacron-1, a supercomputer that hosts over 9,700 artificially created virtual identities, who all think they are just ordinary humans. The purpose of this project is to run projections of future economic demands for steel in the industry. The only link with the real world is Einstein, a contact-entity. However, when Fritz, an IKZ employee, decides to "visit" this virtual reality world, Einstein switches his personality with him to escape to the real world. Fred is suspicious that even he and everyone around him are also just a computer simulation, and is thus given a break from the IKZ due to a suspected nervous breakdown. When two men die, including Fritz, Fred is accused of being the perpetrator. He is visited by Eva, who informs him that they are both just projections of real people in the real world, and that he is a much nicer Fred than the evil Fred in the real world. Fred is shot by the police, but Eva managed to switch his personality with that of the real world Fred, and thus they are now free in the real world.

One of Rainer Werner Fassbinder's most famous achievements, "World on a Wire" is a fascinating forerunner to future simulated reality science-fiction movies like "The Matrix", "Dark City", "The Truman Show" and "The 13th Floor", a one that stimulates the viewers to think by presenting a colossal meditation on Plato's allegory of the cave. Structured like a two-part TV movie, and a sci-fi without any visual effects, "World on a Wire" suffers from an overlong running time of three hours: it has highlights, yet it takes a very long time to get to these good parts due to several overstretched and unnecessary sequences of parties and theatre visits of the hero, Fred. Still, it is interesting how modern and far reaching the vision is in this concept: one remarkable scene has Fred paying a "visit" to the virtual reality world by placing a wired helmet on his head and entering inside the programmed personality of an artificial bus driver, presented as a POV scene of him driving a bus on a street, while his thoughts are heard in the background ("Why are there so few people on the streets? Get away from the road, kid, or there's gonna be trouble!"), until this is interrupted when a giant title shows up over the screen that says: "Fred, come back!"

The art-deco set design is scarce, yet effective, especially in the giant supercomputer control room where Fred and other employees can watch the lives of artificial people on several screens, while the blue color of the cinematography completes the futuristic look. The philosophical questions start popping up in the second, better half of the storyline: in one sequence, Fred created an identical "clone" of his boss Siskin in the simulated world, making him a happy medic in a hospital, while the real Siskin is amused while watching this farce on the screen. Yet Fred points at the fake world and says: "These simulations can go infinitely downwards, as well as they can go infinitely upwards". Later, during a meeting, Fred again talks to one of his co-workers: "Why is the coffee brown? Maybe it's purple in the real world, and some guy just created a brown one in our world as to make it funny while they watch us". Fassbinder directs the movie so that the viewers always sense something is "off" in it, to conjure up the feeling of paranoia in the finale: it features several great moments presented especially through the "subtle" ways in which the computer is trying to eliminate Fred. All of a sudden, a dog shows up from the forest and attacks Fred. Minutes later, a tree suddenly falls just a couple of yards away from Fred. And just as Fred runs away from his hut, it "conveniently" explodes. The implications are profound, and ethical questions are raised: if artificial computer entities can feel pain, is it moral to create pain for them, even if we know that their world is not real? Are their feelings of a lesser value or not? And if a computer can create a perfect simulated copy of a human being, is there a point to talk about a difference between the real and the fake world anymore? Are bizarre, stupid coincidences just coincidences, or a convenient 'deus ex machina' of a higher force to do its biding? All these make "World on a Wire" much more relevant today than during the time when it was made.