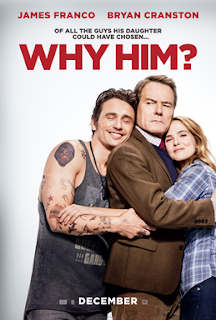 The middle aged couple Ned and Barb are invited by their daughter Stephanie (22) to California to spend Christmas with her new boyfriend, Laird. Upon arrival at his mansion, Ned and Barb discover that Laird is a rich CEO of a video games company, yet that he is a slob, and an unbearable one at that. Ned is especially frustrated as to why Stephanie would fall for such a guy. The mansion is high tech, which makes his stay there uncomfortable, while a party there turns into a drug orgy. When Laird announces that he bought Ned's shrinking company to save it, Ned hits him and leaves. However, when Laird lands with a helicopter with Stephanie at Ned's home, they all make up.

Actors Bryan Cranston and James Franco are dancing on the edge of career suicide: "Why Him?" is a terrible pseudo-comedy, indicating a trend that some people forgot how to make a good comedy and deluded themselves into thinking that scnes of shallow nonsense is some sort of talent. Crude, vile, bloated, dumb, where Franco's character has been reduced to just a primitive hillbilly, and where 50 % of all jokes are just based on sexual innuendo, "Why Him?" seems as if it was written by a 12-year old, where any bad idea is automatically accepted without further scrutiny, obvious in too many scenes of actors' improvisation—without any punchline at the end of these prolonged scenes. The opening has the typical "mass embarrassment" joke, where Ned and his entire team at job are having a Skype conversation with his daughter, Stephanie, while all of a sudden her boyfriend, Laird, enters her room and starts dancing with his naked butt, ostensibly unaware that dozens of people are watching on the big screen. Then Ned meets Laird's mansion, which has a dead moose "conserved" in a bowl of urine; Laird gets angry that his back tattoo didn't turn out good and then encourages Ned's 15-year old son to swear. And of course, Laird always talks about having sex with Stephanie, while her parents are standing just a couple of feet away from him. Needless to say, nothing of this is funny. It's a misguided waste of time. The only good joke is Ned sitting on the toilet and realizing that the modern high-tech mansion has a "paper-free toilet", so the butler has to come in and press the computer button for an automatic wiping of his butt. There are comedies that make a false note, but then "recover" and continue with good jokes to compensate. "Why Him?" is established on a false note, and embraces it until its done to death. As flawed as it was, "Meet the Parents" is miles better than this, both in humor and taste—and that's already saying a lot.