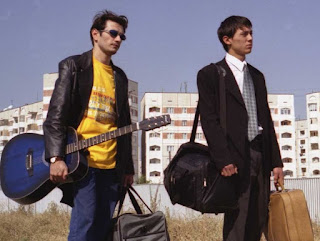 Almaty, Kazakhstan. Max and Beck are two friends who live in the same apartment and work for the same company called Gamma. Every morning, they go to the streets dressed in fancy suits and sell things which are not useful to people, such as a hand lamp, key chains or indestructible cups. Max is much more successful and even gets praise from the company, so he can afford prostitutes, yet Beck is constantly alone and that is depressing. When he fails to find a girlfriend, Beck calls a radio show, "Love at First Sight", and insults the entire city. Max suggest they migrate to Europe, yet then they still decide to go to some Australian city.

"Little Men" affirmed director Nariman Turebaev as the Kazakh version of Jarmusch or Kaurismäki: his protagonists are optimistic friends whom are in sharp contrast with the grey-bleak society that destroys them, while the movie around them is built on a minimalistic style, raw-astringent mood and 'slice-of-life' vignettes without a real story. Besides wonderful panorama shots of the Kazakh city Almaty, the movie impresses the most with its occasional dry humor: in the opening act, Beck lights a cigarette. Max takes it away from him by explaining: "It doesn't suit you." Max then starts smoking himself, saying: "There is nothing better than a cigarette in the morning." Even later on the comical touch is prolonged, such as when the aunt complains at the two protagonists due to their messy apartment ("What did you do with the toilet?" - "Nothing." - "Exactly. Nothing!"), yet the empty walk and the overstretched running time weaken the movie as a whole, since it did not lead to some more inspired moments that would enrich it to a higher level of a viewing experience.