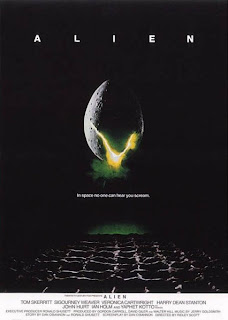 In the future, cargo spaceship Nostromo is traveling towards Earth when it suddenly changes its course and approaches an unknown planet sending mysterious signals. The crew, lead by captain Dallas, wakes up from hibernation and proceeds to land on the planet to investigate its signal. They find an abandoned alien spaceship, Kane enters it and discovers some eggs. Suddenly, one egg opens and a parasite covers his face. Kane is brought back to the spaceship where the parasite falls off. Nostromo continues its journey, but then a bigger alien creature bursts from his chest and escapes. It grows and kills one crew member after another. Ripley is the only one to survives and she discovers the ship's doctor, Ash, was just an android programmed to bring the alien to Earth under any circumstance to use it as a weapon. Ripley blows up Nostromo and escapes in a small shuttle. But the alien is with her so she drops it in outer space.

It seems like blasphemy, but the legendary, critically acclaimed cult sci-fi-horror classic "Alien" is a little bit overrated. It's undoubtedly a movie of quality, but hailing it as one of the best movies of all time seems a little bit off. Plot vise, it is a very simple 'kammerspiel', based on a monster eliminating the crew of a spaceship, but executed with a very tight and strong style, relying on quiet details and subtle suspense that slowly but steadily raise the tension in the claustrophobic, sealed off interiors. The special effects are great and Ridley Scott's technical aspect of the film are flawless: one of the best scenes is the one where the camera transmission of three astronauts walking towards the abandoned alien spaceship on the unknown planet is fuzzy and "imperfect", to stimulate as if it was the real thing. But quickly the crucial unrealistic moment happens: after spotting the nest with alien eggs, astronaut Kane proceeds to approach them despite the fact that a blue laser ray started twitching as a warning signal. One of the alien eggs opens - and what does Kane do? Instead of backing off like any normal person, he just sticks his head towards it until the alien parasite jumps out of the egg and sticks onto his face. The film is at times shown in ellipses, thus it is not shown how his colleagues brought him back to the Earth spaceship nor how he could have survived in the toxic atmosphere when his space helmet was smashed by the parasite.

The seven human characters are not particularly well characterized (except for the main heroine Ripley, played very well by Sigourney Weaver), but come off rather thin. For example, the only thing we find out about Parker and Brett is that one only thinks about money and that the other only responds with "right". One of the premises from the story by Dan O'Bannon is that human incompetence is the major catalyst of the dark events that could have been easily avoided, especially noticeable when the crew ignores the quarantine regulations and simply lets Kane back into their ship. The legendary scene where the small, oval alien creature bursts out of Kane's chest is still equally disturbing as during the premiere of the film, but there lies the second crucial illogical moment: when the creature descends, it is small, just one foot tall, but after it escapes it somehow grows bigger than 7 foot in just a few hours: how? What did it eat? It can't just enlarge from 30 pounds to 300 pounds just like that, no matter what planet it is from. Still, Scott neatly avoids the flaws and places his tactic mostly on the alien threat: the humanoid monster is out there, but the crew cannot find it, and the shots of it are reduced to the minimum. As a straight-forward horror, "Alien" is exciting, some have even interpreted it as a dark allegory of tokophobia, but it still seems a tiny bit too sterile, grey, cold and Gothic dead-set for comfort, topped by its sequel a couple of years later, "Aliens".

Yeah, I always preferred Aliens myself, although the impact Alien had cant be denied!