The Bride with White Hair 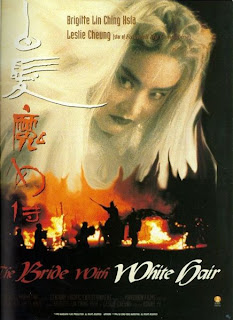 Three servants arrive at a mountain to pick up a magic flower in order to heal their sick Emperor, but the swordsman Yi-Hang kills them. He then remembers his life: as a young kid, he practiced in the battles of his mentor, and when one night wolves attacked Yi-Hang while he was carrying a goat, he was saved by a mysterious girl with magical powers. As a grown up, Yi-Hang had to meditate for three days in a temple as a punishment for killing a thief, missing the return of the now also grown up mysterious woman who attacked the local people who were stealing. The people plan to attack her, but Yi-Hang falls in love with the woman and gives her the name Jiang-Hu. Although she is a member of a cult, she decides to leave it. The magic twins enter the temple and Yi-Hang kills them, but he didn't believe Jiang-Hu who ran away with a white hair, feeling betrayed by him.

Based on a Chinese historical fairytale, vivid Hong Kong cult fantasy movie "The Bride with White Hair" is a good, esoteric and dynamic, but slightly partial balade. Already from the exposition the casual viewer can behold the extravagant Hong Kong "anything goes" film making when the sky and the mountains turn out to be just a set made in a studio, not in real nature, creating an opulently artificial set-design, but the story is a little bit vague, the motivations of the characters confusing and the action sequences filmed in slow motion turn out to be fuzzy due to an error in the camera, which spoils the fluid mood. But the impression is also shattered by mild character development, too serious tone and a few trashy elements like the frenzy scene that introduces Siamese twins connected with each other on the back, causing some of the viewers to find it frightening. It all brings in mind the more imaginative "A Chinese Ghost Story", where Leslie Cheung also starred in, especially in the scene where flying women in white are passing through the screen, but some moments are really unique, like the enchanting one where Jiang-Hu (excellent Brigitte Lin) puts her magic hair around the hero's neck as if she is going to strangle him, but then she just kisses with him under a waterfall. "The Bride with White Hair" is an opulent fantasy romance where it seems it's more interesting to observe the sheen set designs and costumes than characters and story.

Thanks for the recommendation. I'm gonna find this one