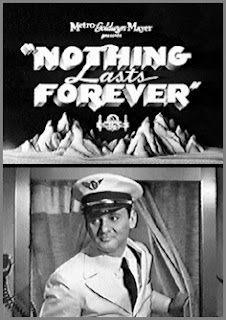 Adam is pretending to play a piano, but in reality that instrument is running automatically. The audience in the hall notice the trick and get angry... Adam wakes up. It was all a dream. Then a stranger he meets in a train advises him to become an artist, so Adam leaves Europe and returns to New York. Once there, he first needs to get a licence for artists, but fails and starts a relationship with a portrait model who cheats on him. When Adam gives a homeless man some bread the latter leads him to an underground layer full of colors that plans to bring love to humanity. Adam enters a bus that flies away and lands on the Moon. There he can walk without space suits and finds the woman of his dreams, but gets persecuted by Ted, the bus conductor. Back on Earth, Adam starts playing the piano and everyone loves him.

"Nothing Lasts Forever" is an original, unique and different feature length debut from director Tom Schiller, a comedy of a questionable cult. Schiller obviously has a creative mind so he directed this 75-minute story in black and white photography, except for the middle sequences of the underground world and locations on the Moon that are filmed in vibrant colors, symbolizing an apathetic, anemic and stiff society of the modern world until the hero Adam discovers a different world where he finds happiness, handling the themes of mechanical conventions and revolution, but only marginally touching them. The movie is bizarre and abstract, but sadly also confusing and not particularly funny. The enthusiastic hero Adam is desperately trying to become and artist but doesn't have talent, which is implied in his dream where he is "playing" the piano that is run automatically, and his wondering through New York without a goal or consciousness in search for some inspiration - or meaning? - are interesting, but vague and many moments don't have a point. The most interesting parts are small appearances of stars like Dan Aykroyd as the annoying boss or Bill Murray as the bus conductor that chases the hero across the Moon. Today, the movie is hard to find and has become a collector's item, and a few gags are amusing: for instance, Adam gets the assignment to quickly draw a naked woman model in front of him on paper, and he tries but sooner than expected the time is up and the only thing he managed is to draw is black pubic hair on the blank paper. Other instances include a harp as a symbol for promise, a triple cappuccino getting served in a enormous cup and Adam's fall from the Moon to New York.