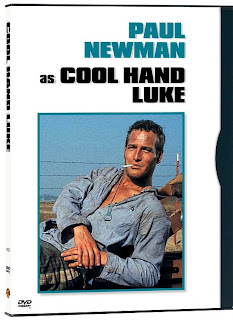 Luke is a young guy who is sentenced to two years in a Florida prison camp for cutting off the heads of parking meters. Luke is extremely rebellious, but half-heartedly follows the instructions of the boss in charge and prison guards. He and other convicts have to clean the ditches from bushes or make roads. He soon gets into clinch with the veteran prisoner Dragline, but then makes up and becomes friends with him. After his mother dies, Luke becomes nervous and escapes. He is caught and brought back with chains, but he manages to escape again. After a few weeks, he is again caught and then tortured by the boss and the guards. Nonetheless, he escapes for the third time, this time with Dragline. They are cornered in a empty building, where boss shoots and kills Luke.

Classic prisoner drama "Cool Hand Luke" is one of those 60s movies that are so tough, so wild, so daring and so gritty that they easily manage to stir up even today's audience with ease, remaining fresh even for the next 100 years. The whole story pushes the envelope and limits of censors so unbelievably that one may wonder how the authors got away with it in the 60s: after the new prisoners get deported to the new prison camp, the prison executive Carr explains some of the rules: "There's no playing grab-ass or fighting in the building. You got a grudge against another man, you fight him Saturday afternoon. Any man playing grab-ass or fighting in the building spends a night in the box". While working in the ditch on the hot Sun the whole day, the convicts have to loudly announce their every "unusual" movement: for instance, when Dragline wants to take his shirt off, he first says: "I'm taking my shirt off, boss".

And not to mention the surprising, daring and unusual sequence where the convicts are digging and observing a blond woman in the distance washing her car in tight clothes: that erotic movement became an icon that was copied a hundred times through various later films, from "Wild Things" to "One Night at McCool's". But unlike many later savage and primitive films, "Cool Hand" actually contains a dose of subtlety and measure that gives it superiority and genuine class. The performances are also fantastic, from the brilliant Paul Newman as the title hero up to George Kennedy as Dragline, who won several awards as best supporting actor. Lastly, the concept of the story is the basis for all of the films virtues: it displays a non-conformist anti-hero who is extremely rebellious. It seems he would actually do the opposite of anything just because everyone else is doing it the other way around. Luke is a tragic figure, a man cursed with bad luck since the director Rosenberg hints that he shouldn't have been convicted in the first place just because he destroyed parking meters, portraying the convicts as naive fools who did something stupid once, and the prison guards as their oppressors.