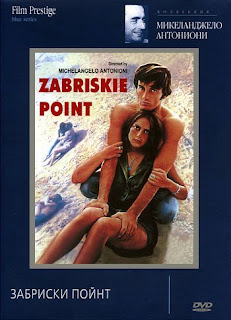 Mark is a young student and a member of a group that is protesting against Capitalism in the USA. Daria, a young secretary working for a company that plans to spread Los Angeles further into the desert, is bored with her life. Mark visits a friend in jail and joins a demonstration in which a policeman gets killed. Since everyone suspects he is the perpetrator, Mark steals a plane and flies into the desert. There he meets Daria, who was traveling to a conference meeting, and the two of them fall in love. When Mark returns the plane, he gets shot by the police, while Daria hears it over the radio. She arrives at the conference, but then leaves.

In allegorical drama "Zabriskie Point" Michelangelo Antonioni created a elaborated critique of the US society in the 1970s in which he especially attacked the consequences of Capitalistic greed and inability of a simple romantic relationship between a young couple. The fact that he is more socially engaged than artistically is another point. The exposition of the film is very powerful and brilliantly realized: in it, students are in a meeting contemplating about the power of their movement, until finally Mark stands up and says: "I'm ready to die..." Everyone looks at him in apathetic manner, and he finishes his sentence: "...but not from boredom!", and leaves the meeting. Antonioni surprisingly introduced the society of the US as an obstacle, hindering, so his two main heroes, Mark and Daria (wonderfully played by Daria Halprin, who made only 3 films in her entire career before she unfortunately abandoned her acting profession) finally meet only in the isolated desert, nowhere land where they are completely free of norms or authority. That desert segment somehow manages to capture something esoteric in it's tranquility, displaying a touching spiritual platform where Mark and Daria fall in love naturally and without pressure, return to their essential state, and proceed to have intercourse in the sand in a surreal sequence where they are surrounded by other half-naked couples also making love. The story is often boring and stiff, but the end where Daria observes the house of her bosses getting blown up by a explosion while in slow-motion chopped up food is flying in the air, is a subversive critique of Consumerism.