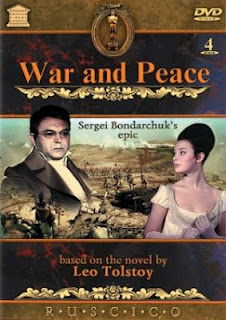 Russia, 1805. Pierre Bezukhov, an intelligent but clumsy man, is surprised when he finds out that his father, a wealthy count, died and left all his inheritance to him, his illegitimate son. Pierre marries Helene, but soon decides to divorce her. At the same time, Andrei Bolkonski is leaving his wife Liza and his "boring life" to enlist as a soldier and fight against Napleon's army in Europe. He gets wounded and returns back home. When his wife dies at childbirth, he starts feeling guilty for neglecting her. He gets engaged with Natasha Rostova, but she falls in love with Casanova Anatol. She later regrets that decision, but Andrei leaves her. Another subplot is the "Great Patriotic War" of 1812 against the invading Napoleon's Armies. The people of Russia from all classes of society stand up united against the enemy. Andrei dies, Pierre gets captured and used as a hostage by the French army, but is saved. In the end, Pierre marries Natasha.

Everything in the Russian film "War and Peace", winner of an Oscar and Golden Globe for best foreign language film, is colossal. Its running time is 10 hours. Its budget is 10 million $, making it the most expensive movie outside the US at that time. It apparently had 100,000 extras. And even in most important terms—quality and substance—this film rises to heights. The biggest problem of Sergei Bondarchuk's movie monster—filmed to commemorate the 100th anniversary of Leo Tolstoy's famous novel—though, is actually that it's obvious that the earlier American adaptation of Tolstoy's same novel, directed by Vidor back in '56, had a tremendous influence on it. Also, some parts are inevitably too long and drag, since even the novel had some unnecessary-empty spots—as a footnote, Dostoyevski managed to say as much about life in "Brothers Karamazov" as did Tolstoy's "War and Peace", except that he needed half as much of pages.

Still, there is no doubt that this is an excellent film, rich with an amazing visual style and esoteric inner-narration and thoughts of the characters, which, of course, gains its inspiration from Tolstoy's sweeping writing. For instance, in one rather romantic scene, Natasha is talking with Andrei about how much she loves him and is thrilled to feel these kind of emotions. But at one point he suddenly starts losing interest in her, thinking how "he doesn't feel love towards her, only pity because of her fragile state". Andrei's hallucinations about the clouds when he is injured at the battle field are unbelievable, as well as various unusual camera angles, and the great Battle of Borodino between Russian and the French army is of epic proportions, almost meticulously reconstructed. Bondarchuk's "War and Peace" is such a huge film that it almost becomes a burden, but it is an event that cannot be found everywhere—unlike many monumental films that are empty pompous vehicles, this is a monumental achievement both technically and spiritually.